SoHo Memory Project is pleased to announce two new initiatives that present SoHo’s extraordinary history, from the 19th century through the present day. 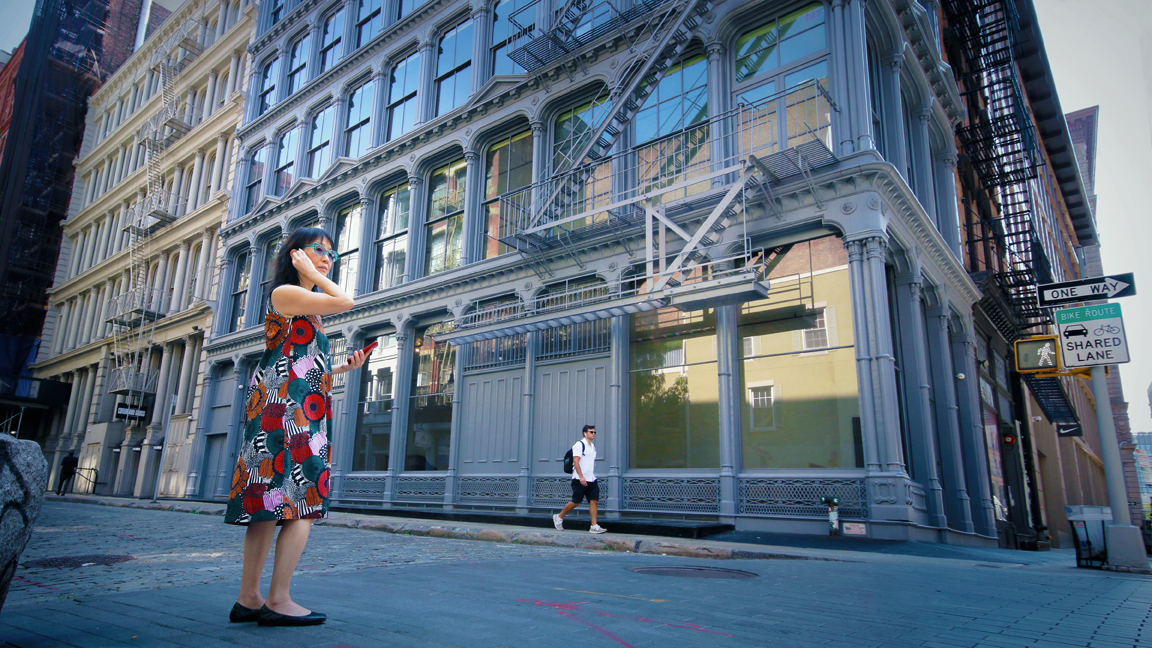 SoHo: A Retrospective is a free GPS-triggered audio tour about artists’ SoHo produced in partnership with Gesso, an audio AR platform that inspires meaningful explorations of the world through immersive, cinematic audio experiences. (photo: Hirotsugu Aoki)

This tour mixes site-specific anecdotes about SoHo’s storied past with SMP founder Yukie Ohta's personal memories of growing up amidst artists and cast iron and is enriched by interviews with artists, authors, and SoHo residents.

All you need are headphones and the Gesso app, available on iOS and Android. Begin your journey by clicking here.

"I had so much fun working on this project," says Yukie. "My passion has always been to weave the old with the new as a way to preserve SoHo's unique story. My favorite part of the tour is the story about jumping all over a John Chamberlain sculpture that was in our loft when we moved in. Well, I can't tell you all of it -- you'll have to take the tour!" 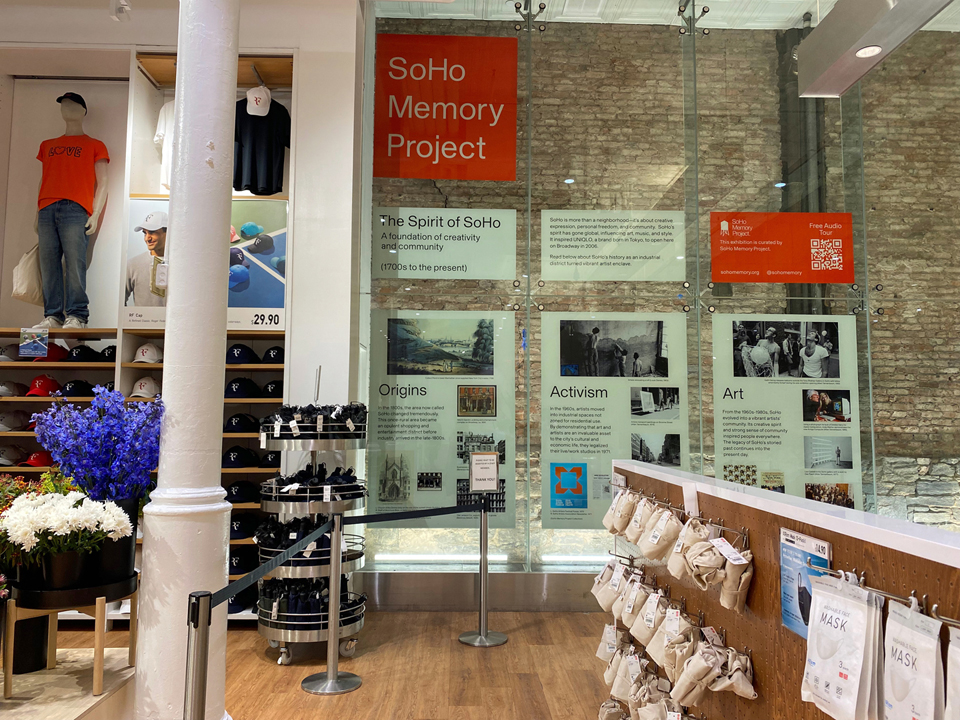 SoHo Memory Project, an exhibition on the main floor of the Uniqlo SoHo store, is a visual primer on SoHo history from the 1700s to the present designed to draw in audiences who might have only heard whispers about SoHo’s creative legacy.

Featuring images by former SoHo Weekly News photographer Allan Tannenbaum, this exhibit focuses on the activism of SoHo artists and their creative legacy that continues on into the present day.

Yukie founded SoHo Memory Project over a decade ago as a nonprofit organization that celebrates and preserves the history of SoHo. Since then, she has been working to make archives and preservation not only accessible to all audiences, but also cool and interesting. This audio tour and exhibit are aimed at doing just that.

The SoHo Memory Project exhibition is part of Uniqlo’s The Spirit of SoHo campaign that celebrates their 15th anniversary in SoHo and features creatives and creators who have contributed to New York’s downtown arts scene, including Yukie, as well as curator Jeffrey Deitch, graffitist Futura, culture critic Carlo McCormick, photographer Ryan McGinley, and gallerist Nicola Vassell. Learn more about what they're up to here. 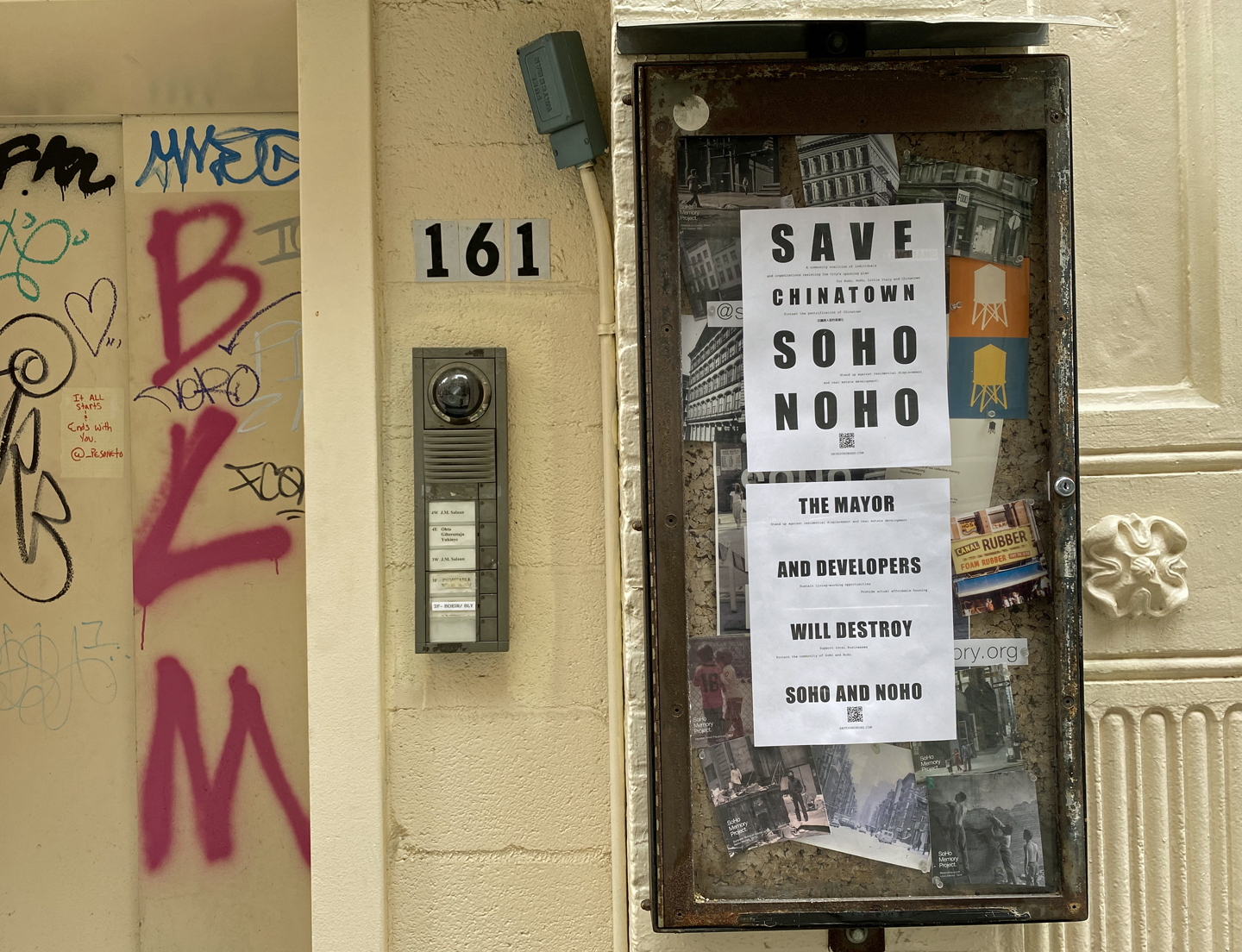 As SoHo navigates the COVID-19 pandemic amidst turmoil over the city’s SoHo/NoHo upzoning plan, it is more important than ever that the public understands that which makes SoHo unique among New York neighborhoods, in order to make informed decisions about how to shape its future.

In January 2020, the city released a proposal to rezone SoHo and NoHo, claiming it will make these neighborhoods more diverse and affordable, as well as allow new development that is in scale and character for the neighborhood. In fact it will do just the opposite, allowing wildly out-of-scale new structures, encouraging the demolition of older ones, and encouraging the proliferation of big-box chain stores. Research by Village Preservation has also shown the plan would make these neighborhoods wealthier, less diverse, and more expensive, and would generate far fewer units of affordable housing than had been promised. It would also have a disproportionate impact on Asian-American and lower-income residents who will be forced out as their homes are replaced by new, bigger, more expensive buildings. (from villagepreservation.org)

Things you should know about the up-zoning

*Enables 200+ foot towers to be lined up along Broadway, Lafayette, Canal, West Broadway, Centre & The Bowery
*Overlays the entirety of both SoHo + NoHo with new allowances for rooftop & penthouse construction
*Implements a new loft conversion fee, targeting residential owners, with no comparable fee for commercial owners
*Brings new allowances for massive destination retail with NO restriction on size
*Adds the potential for over nine million SF of new structure (equal to three Empire State Buildings)
*Not a single unit of affordable housing is guaranteed to be built
*Not one square inch of new green- or open-space is proposed throughout the entire re-zoning area
*Threatens DISPLACEMENT of vulnerable businesses and residents in SoHo, NoHo and Chinatown.
(source: savesohonoho.com)

To find out more about the proposed plan and how to send a letter in opposition visit Save SoHo NoHo.

We believe the uniqueness of this neighborhood carries into everything that transpires here. For those who live here, work here, or simply visit the neighborhood, SoHo Memory Project exists as a celebration of SoHo in all its iterations.

Thank you for considering a tax-deductible donation to this project. Your generous gift will go a long way to maintaining, preserving, and expanding our archive!