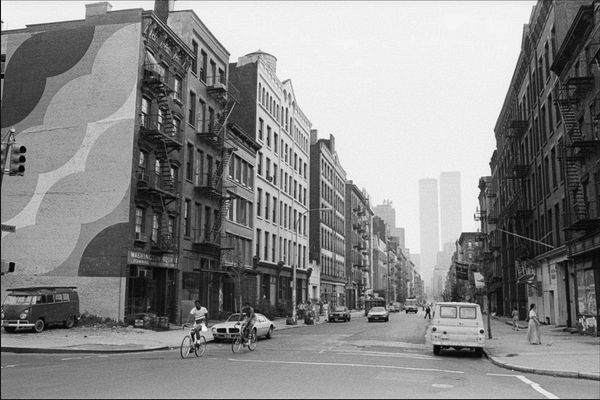 Meet Me on the Corner of Pollock and De Kooning

Did you know that West Broadway could have been named Jackson Pollock Place?  I guess those of you who were already grownups in 1972 might remember that in February of that year, Auguest Heckscher, the city's Parks, Recreation and Cultural Affairs Administrator, proposed that the stretch of West Broadway between Canal and Houston Streets be renamed "Jackson Pollock Place."

The proposal was not very popular amongst residents.  According to David L. Shirey of the New York Times, some said it would commercialize SoHo, some felt that Pollock did not represent the current aesthetic of SoHo and would therefore misrepresent the neighborhood, and others thought that some of the artists living in SoHo at the time still felt they were in competition with Pollock and would therefore not want to see his name on every piece of mail they received.

If the proposal had been approved, it would have been the first time a street was named after a modern American painter in New York City.  West Broadway was previously called Fifth Avenue South and before that it was Lorenz Street, after a general in George Washington's army.  The portion of West Broadway that is north of Houston was renamed La Guardia Place, after former New York City Mayor Fiorello H. LaGuardia, in 1967.

A few years later, in 1976, artist Gary Reister planned to paint a mural depicting twelve pioneer abstract expressionist painters, including Jackson Pollock, at 393 West Broadway.  This plan also came up against strong opposition from the SoHo community.  Does anyone know if the mural was ever painted?  I don't remember it.