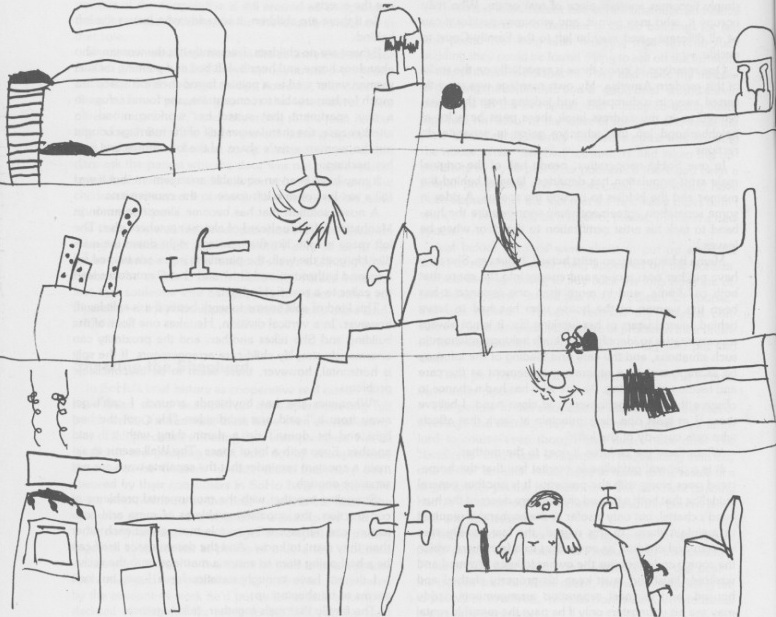 In 1977, Jim Stratton, former UPI reporter, urban affairs columnist for the SoHo Weekly News and veteran SoHo loft dweller, published a book entitled Pioneering in the Urban Wilderness about the pioneering spirit he encountered in "the dilapidated and underused spaces of America's disaster areas" in cities across the United States, including New York, where people had converted non-residential buildings into alternative living areas. The following is an excerpt from this book entitled "Loft Childen," about how his own children found amusement and education while growing up in the chaotic environment of ongoing construction, something all of us "loft children" can relate to!

How loft construction affects the child's perceptions. Jeremy (age 5) conceives of his loft building in three stories. His double-bunk shares the top floor with a bowling alley, there's a carpentry shop in Two, and a kitchen and bathroom on One. Note the mouse still in residence on the second floor.

A loft under construction—which is most of the time—may cause an adult to stagger, but children seem to take it easily in their shorter strides.  There are many interesting things to play with, if their parents don’t catch them first.  Nails can make an exciting clatter as they pour out on the floor, and the gleam brightly when distributed uniformly across a large space.  Taping compound is fun when you take the top off a tin and make the gloop into little balls—then dry rock hard on whatever surface they may have left on, and it can be fun watching parents chisel them off again.  Sawdust can be even more fun if it’s mixed with something runny, like chocolate syrup.  And until the downstairs neighbor comes running up to tell mommy, those holes in the floor can be wonderful places to put small pieces of brick and glasses of water. I constructed a good part of my first loft with the first born small one, Jeffrey, hanging onto the ladder behind me.  This toddler was observing the progress of construction with an active interest that rivaled even that in “Sesame Street.”  Before he could hold a crayon, Jeffrey could hold a hammer; and before he could draw the alphabet he could construct it out of short pieces of lumber on the floor. Even after Jeffrey had learned the usefulness of a piece of paper, this early training stuck with him; his first letter “E,” for example, was drawn like this:

The little dots, of course, are nails. Some of the training in construction was not exactly what daddy had hoped to pass along to his son.  After watching daddy wage a long and private war with recalcitrant lumber, Jeffrey set out on his own with a board and an hammer.  He would swing at the board and shout, “Got bam it!” after every stroke.

If the city bureaucracy thought they were dealing with an organized group in SoHo, they would have paled at meeting the really heavy military mechanism of the neighborhood:  the child-care cooperative called the SoHo Children’s Playgroup.  The “mothers of SoHo”—which included a fair number of fathers—renovated a basement, blitzed the emerging community with bake and rummage sales, and organized some of the finest fund-raising parties in local memory.  While the little urchins dreamed of playing with blocks, paints, and lengths of lumber in their homestead basement, the parents danced late into the night, counted the proceeds, and plotted the next week’s child care and lunch schedules with the efficiency of a computer. The loft babies, growing up with all that space, art, and fun material around them, naturally began to build their own dream houses.  Second-born Jeremy designed the one on this page: notice the bowling alley on the top floor opposite the kids’ bunk bed, the mouse on the floor below, and the happy chap in the bathtub.  Unlike apartment houses, where a myriad of tiny cubicles is confusingly oriented and monotonously the same, loft building s offer simple layers with special and unusual things on each floor. Of course, Jeremy has his own ideal space in mind.  “Daddy,” he once said to me, “next time why can’t we live in an apartment?’