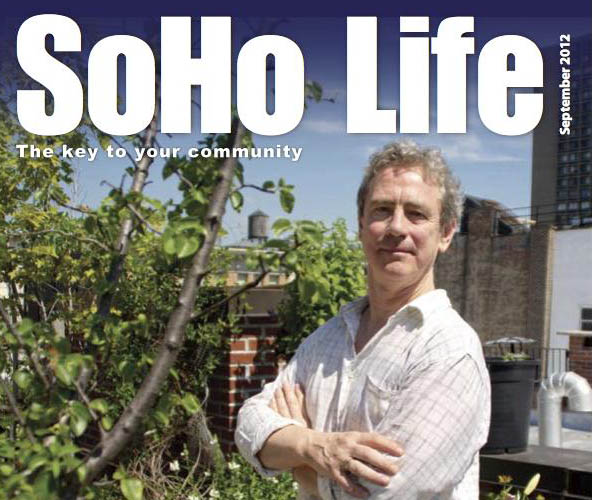 Keeping Watch: The SoHo Alliance and the Preservation of SoHo

In a recent email regarding community opposition to NYU’s 2031 plan, Sean Sweeney, director of the SoHo Alliance, announced:

In a stunning victory for our community, a State Supreme Court justice ruled that the City acted illegally in giving away parkland on Mercer Street and LaGuardia Place to NYU to be used as a construction staging-area for the university’s planned 20-year expansion program.  NYU had planned to squeeze 1.9 million square feet of high-rise buildings into the two super-blocks above Houston Street. (Read more about the plan here.)

Sean Sweeney on the cover of SoHo Life magazine

The SoHo Alliance, with the tireless and fearless Sweeney at its helm, was instrumental in this victory. As a matter of fact, Sweeney and his associates who form the all-volunteer SoHo Alliance have been working for decades to preserve SoHo’s quality of life by actively monitoring proposed development and opposing developers who attempt to overreach the boundaries of regulatory laws.

In a profile of Sweeney in the now-defunct SoHo Life magazine, he states, “The SoHo Alliance strives for controlled and appropriate development – a balance between residential and retail, seeking a quality-of-life that benefits everyone who visits, lives or works in SoHo.” Without the SoHo Alliance, our neighborhood, believe it or not, would most certainly be far more commercially developed than it is today, with bars and nightclubs on every corner late-night revelers disturbing our peace at every hour.

Alliance members serve in key leadership positions on Community Board #2, providing our neighborhood a direct voice in City government. A few of their many accomplishments this past year (click here to see more) include:

- Raised thousands of dollars to help defray the legal expenses of a continuing lawsuit against the massive NYU expansion plan.

- Supported Village activists in persuading the Landmarks Preservation Commission this month to extend the Greenwich Village Historic District to include the South Village area north of Houston Street and south of Washington Square Park. Further, we are currently working with these same activists to extend this historic landmark designation closer to home: south of Houston, including Sullivan, Thompson and MacDougal Streets. This would preserve the unique character, history and architecture of that area, while preventing underregulated, inappropriate development projects.

- Succeeded in eliminating Fashion’s Night Out in SoHo. The event was initially an effort to support the fashion industry. However, within a few years, it unfortunately devolved into a mob fest. As a result of our action, SoHo will no longer be overrun by rowdy, inebriated, underage kids looking to party and act out.

- Advocated for a public park at the Elizabeth Street Garden site, located on the City-owned lot on Elizabeth Street south of Spring – instead of accepting the housing project that the City has proposed there. - Opposed the formation of a Washington Square Park Conservancy. This is a scheme in cooperation with NYU that proposes froufrou projects for their vision of a sanitized park. For example, one proposal involves the removal of the hot dog vendors and replacing them with expensive trendy alternatives. The conservancy’s agenda goes against the grain and sensibility of the park’s storied history. - Brought in Speaker Christine Quinn’s office to broker a meeting between residents and proprietors of a rowdy bar on the western edge of Broome Street, in an effort to curtail late-night noise and brawls that were disturbing the neighbors there. - Worked with neighbors and small businesses this summer in sponsoring a genuine Crosby Street fair and block party, in sharp contrast to the commercial, cookie-cutter street fairs we have been fighting for years.

The SoHo Alliance is staffed entirely by volunteers, but, like all non-profits, it has expenses to meet: lawyers, consultants, computer maintenance, office charges, etc.  Please visit their website to find out more and PLEASE PLEASE PLEASE click here to donate funds to help keep SoHo the neighborhood you want it to be!

The following is an excerpt from the Autumn 2007 issue of the SoHo Alliance Newsletter that outlines the Alliance’s history:

Ever wonder why SoHo has not met the fate of surrounding neighborhoods like the Meat Market, Chelsea and the Lower East Side? Read on.

In the early 1990s there were only two SoHo residents out of fifty people serving on the local community board and neither belonged to the SoHo Alliance. This under- representation often saw the needs of our neighborhood neglected. SoHo Alliance members began to apply and soon we had a few on board. Simultaneously, parts of SoHo were suddenly inundated by rowdy bars and noisy late-night restaurants. (Presciently, in 1976 the Alliance had a zoning law passed that restricted nightclubs, saving us from the fate of Chelsea or the Meat Market.)

In 1993, to our rescue along came the Padavan Law, which severely restricts the State Liquor Authority (SLA) from issuing new liquor licenses within 500 feet of each other in order to prevent oversaturation. The Alliance was the first group in the state to employ the law successfully and that worked well, until George Pataki appointed new commissioners who ignored this law and granted one license after the other despite community board objections. One commissioner was a former president of the beer distributors association of New York, a liquor industry insider. Another reportedly had free cases of booze from liquor distributors delivered to his home at Christmas.

Realizing the cards were stacked against us and that the only redress was the courts, the Alliance worked with various SoHo block associations to sue the SLA on numerous occasions to prevent the granting of liquor licenses when the community objected. We never lost a court case. However this cost our neighborhood well over a hundred thousand dollars in legal fees. Nevertheless, it was well worth it to preserve our quality-of-life, property values and neighborhood character.

The corruption and cronyism of the SLA caused then-Attorney General Eliot Spitzer to launch an investigation. In disgrace, the chairman and the commissioners resigned, replaced by a former police chief who had prosecuted police corruption upstate. Also, for years we had been decrying the fact that none of the three commissioners was a city resident, someone who would understand our neighborhoods and local problems. Consequently, the political wing of the SoHo Alliance - the Downtown Independent Democrats (DID) downtowndems.org - worked with our State Senator Martin Connor to have a city resident appointed to the SLA. Commissioner Noreen Healey was named last year.

It is gratifying to know that local groups can exert such statewide influence. Seeing the power of community boards to prevent oversaturation of neighborhoods by rowdy bars, in the late 1990s some ruthless members of the nightlife industry decided to pack the boards in order to thwart the legal successes that residents had gained. They found an ally in former borough-president Virginia Fields. Seeking funds for her failed bid for mayor, Fields sold seats on the boards to campaign contributors from the nightlife and other troublesome industries. Campaign Finance Board records reveal that seats were awarded for as little as a $100 contribution to her campaign. As a result, cronyism and corruption reigned for her eight-year tenure. Community activists not appointed by Fields were punished and the residents suffered.

Again, our political wing, the DID, kicked in. When Fields was forced out by term limits in 2005, the DID supported and worked hard to secure the election of the sole candidate who spoke of reforming the community boards, Scott Stringer. Our grassroots campaign succeeded and Scott was elected, receiving his highest margins from SoHo voters. Stringer kept his promise. Now the community boards have been cleaned up, the deadwood replaced by intelligent, motivated and dedicated activists. Finally, Stringer helped redress the endemic under-representation that SoHo had long suffered. Instead of two members, eleven of the fifty board members now reside south of Houston, many of whom are SoHo Alliance members with several holding key leadership positions. They serve to represent your interests.

A few factiods from the Alliance’s Autumn 2005 newsletter:

Did you know that...

… the name SoHo was first given prominence  in 1969 at a meeting of activists who were trying to get loft living legalized by the city?

... the first working artist to live/work south of Houston was Jimmy Stephenson who moved into the Federal-style house at 146 Spring Street, adjacent to the flea market on Wooster Street, in 1950. ...the first tenants to reside in a SoHo loft were Bill and Iris Alex. They were architects who had lived in a loft in Chicago where they studied architecture. They liked the life style so much that when they moved to New York in 1949 to work, they sought out a loft in this area for a studio and residence.