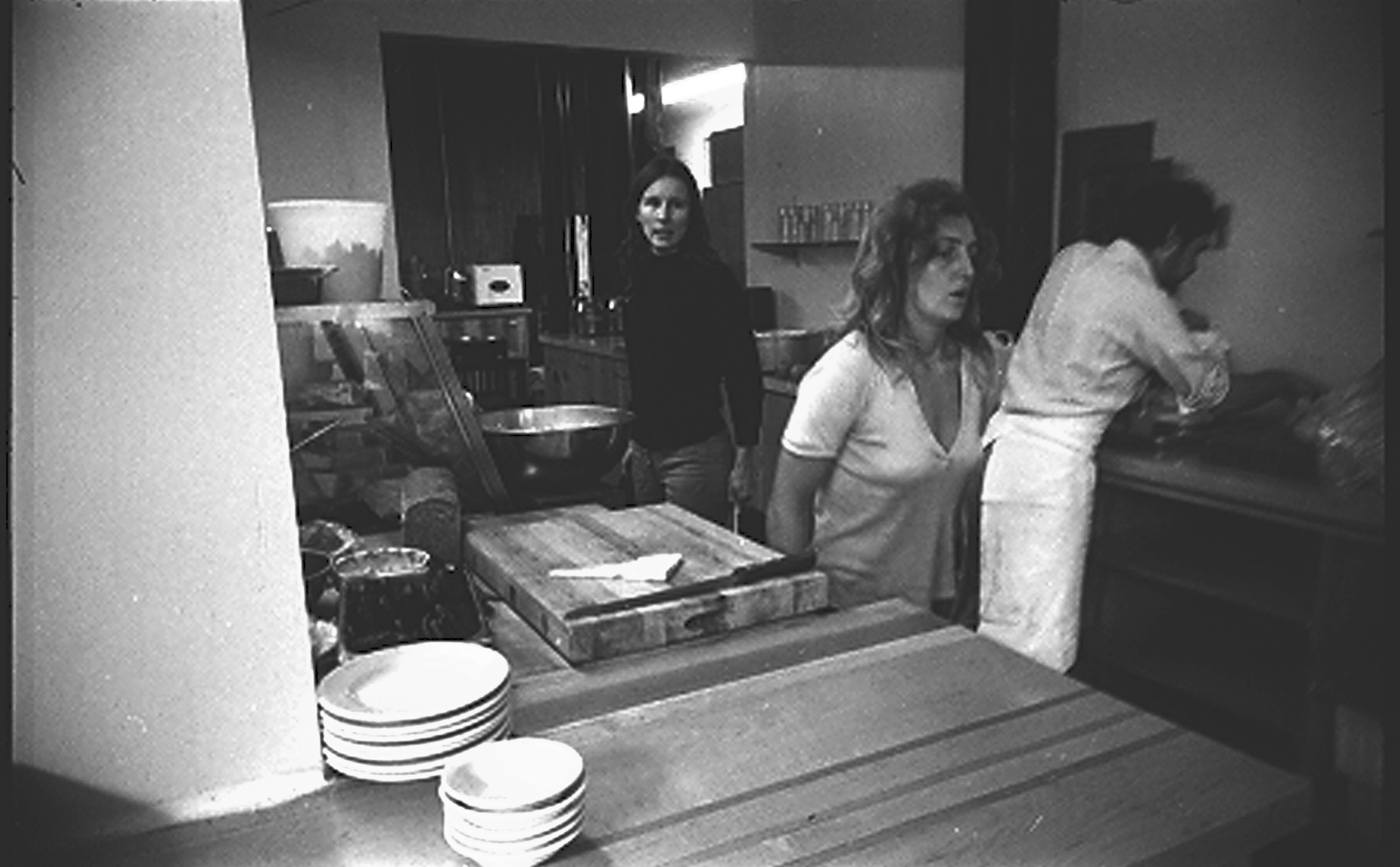 Interview with Carol Goodden about FOOD

Today we have a special treat.  In this guest post, my old SoHo pal Bethsheba Goldstein (Sheba to her friends), remembers going to an Alternative Space show underneath the Brooklyn Bridge that featured outdoor sculptures and a pig roast hosted by Carol Goodden and Gordon-Matta Clark, founders of FOOD restaurant.  She then interviews Carol about her own memories of the event and how it eventually led to the founding of FOOD.

Under the Brooklyn Bridge: The Origins of the Restaurant FOOD

When I was just about three years old my father brought me to my first Alternative Space show. It took place under the Brooklyn Bridge and it was one of my very first exposures to the Alternative Space movement, of which I have many memories. I remember my father carrying me as we walked all the way downtown from our loft on Greene Street, all the way down Canal to Pearl street and onto the Brooklyn Bridge. I was still too little to walk that distance without being carried. I remember the adults all being very excited about the show we were going to.  We were invited to attend by our neighbor, the artist Gordon Matta-Clark, who had just opened an Alternative gallery space at 112 Greene Street. He and his girlfriend, Carol Goodden, were providing a pig roast for all of the guests along with some outdoor sculptures Matta-Clark had fashioned using sticks and abandoned cars people has dumped under the bridge.

The show was curated by Allana Heiss of MOMA/PS1 and featured an open space installation of work from Post-Minimal Artists: Gordon-Matta Clark , Bill Beckly and Tina Girouard, Carl Andre, Sol LeWitt and Dennis Oppenheim. Richard Landry and the Phillip Glass Ensemble provided music in celebration of the Brooklyn Bridge’s 80th birthday.  Artwork was nestled into the dark hollowed spaces under the bridge. It was the age of Performance Art and a time when many artists were collaborating and experimenting with the concept of making and viewing art in alternative spaces. Deserted warehouses became artists lofts, the rooftops of buildings became outdoor theatres, dancers performed on wrought iron fire escapes and the forgotten spaces under the Brooklyn Bridge became a makeshift gallery and restaurant, sparking the beginnings of the much-loved restaurant FOOD.

What was most memorable about the show for me was the dinner provided to the guests by Gordon Matta-Clark and Carol Goodden (CO- founders of the Restaurant FOOD) which opened later that year  (1971).  I remember this was my first taste of pork, which was not something that we ate in our home and was considered non-Kosher. But we ate it anyway and I remember the pink fleshy meat tasting so juicy, tender and salty. I also remember the pork sandwich being given to us by Matta him-self. The general vibe back then being way more relaxed and casual then it is today.

Since my last blog submission posted for the SoHo Memory Project ("My Father," August 20th 2011), I began corresponding with Carol Goodden, who was the original owner of FOOD and the driving force behind opening the famous restaurant. Over the past year, she has generously shared some of her memories and photographs of the PS1 Alternative Space show and the origins of the restaurant FOOD. The following is a short interview with Carol.

BG: Was the show “ Under the Brooklyn Bridge” a planned artistic collaboration between friends?

CG: It was a show being put on by P.S. 1, one of the alternative space pioneers. Gordon and I had just met not too long before. He took me to one of his favorite "haunts," being underneath the bridge. I believe Gordon suggested the space to Alanna Heiss who was head of the PS1 art shows. There were all kinds of great pieces there in the art show. Bill Beckley hung some narrow board swings on very long ropes from the bridge, so that when you sat on the swing and swung out, you swung way out on the water. Pretty thrilling and symmetrically beautiful. Tina Girouard made one of her "houses" out of dirt sweepings. Gordon cooked "dinner" which was a suckling pig that I got from the Jones Street meat market. He injected the pig with pepper water, which made it very succulent and juicy. Gordon and I collected tons of branches from the NJ swamps to build our fire. He also covered all the junk cars with branches, and they were part of the "piece," in his mind. I swung a hammock between piers so that we had some place to lie during the night as the pig slowly cooked. Then Gordon served (reportedly) 500 ham sandwiches to all the participants in the show and the audience who came to look. While Gordon and I rested in the hammock, across the East River, there blinked big red lights on a building - THE WATCH TOWER, THE WATCH TOWER. I think Dickie played the sax, maybe even the whole Philip Glass Ensemble played. Mabou Mines did a Beckett play—totally great.

BG: How did the idea for the pig roast come about?

CG: It is hard to answer these kinds of questions because none of us really stopped to say, "what prompted that idea?" We just had an idea and then executed it. Gordon liked food and large-scale things. I might have even suggested the idea to Gordon, because when I was living in Nevada, we used to ride out to ranches. They would have a pit dug where they roasted a pig in the coals, and covered it with dirt. It was phenomenally good. I miss those cookouts, people are so insurance minded now. I might have mentioned those pig roasts to Gordon, in fact I'm sure I did, lamenting that we could not dig a pit. He picked up on it and said he could fashion a spit. And so we went with that idea. I found the pig and bought it, and we both cooked it. Gordon rigged some kind of grilling mechanism.

BG: How long did it take to roast the pig?

CG:  It took all of 12 hours, maybe more like 18. I think we started late afternoon the day before. Somehow the roasting of the pig was connected in Gordon’s mind to the cars that were buried under the brush. Maybe the dead cars reminded him of the shape of a pig. Who knows?

FOOD Construction: This is one of Gordon and my dog, Glaza, the famous "art dog," as he appeared everywhere and even in the film about FOOD. Tina Girouard is hauling trash out. This was during our construction phase. (photo: Carol Goodden)

BG: Were you and Gordon at all influenced by the Moosewood Restaurant or by Alice Waters of Chez Pannise when you opened FOOD in 1971?

CG: I don't think Gordon was influenced by the Moosewood restaurant, or Alice Waters. He was very much his own person. He was much more influenced, as was I, by European food cooking/shopping/presentation. We were not particularly "health food" oriented, but we were very social, and Europe (from which I had recently returned, and where I was born) is all about social gatherings, with food. Rachel and Suzy Harris were health food oriented and they brought that into FOOD. I think I came across the Moosewood cookbook while running FOOD and did use some of the recipes. Gordon and I had heard of Alice Waters but I still don't know much about the restaurant, what it was like, what it looked, like or what it served. None of those other restaurants had an influence on Gordon and me opening FOOD. I had just come from Europe. Gordon was very European having spent his early years in Chile and having a father whom lived in France and Italy. I was cooking a lot and having big loft eating parties, a good year before I met Gordon. Then I threw a spring party in my loft, which had as a theme—flowers—meaning come dressed as flowers, bring flowers, make edible flowers, whatever. I invited Gordon to that party. He had been having his own eating parties down in Chinatown. I made an elaborate spread of all kinds of really great food for the party. Gordon suggested (kind of teasingly) that I open a restaurant. I was tired of providing so much food for free, so the idea hit home. I said I would do it if he would be part of it. The next week I found Comidas Criollas on the corner of Prince and Wooster Streets and negotiated them out of their lease. That was the beginning of FOOD. I was particularly interested in a little deli on 2nd Avenue, how they ran it. Also, the restaurant The Back Porch (or maybe it was called The Front Porch?) opened about the same time, slightly before FOOD, I think, and oddly they kind of had the same ideas as we did —fresh food, homemade food, soups and sandwiches, stews, inexpensive, casual. But they didn't influence us nor we them. Gordon was doing a lot of food-related pieces at the time, like "cooking" large pans of agar and then leaving them to dry and mould. Then the pig roast. Then frying photographs and then the whole event of FOOD kind of capped off making pieces with or about food—really it was a morphing process. He then morphed into building cuts.