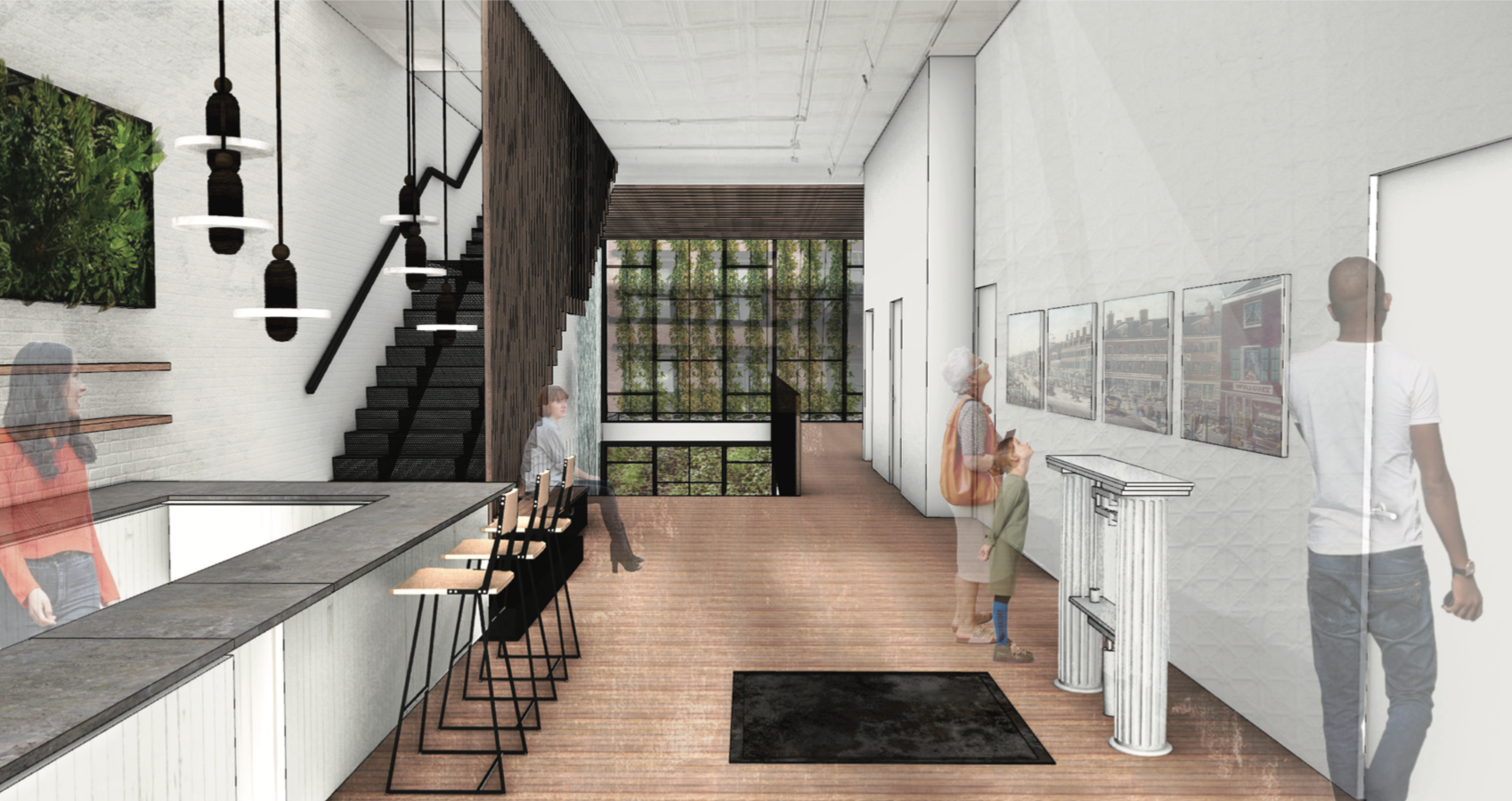 What would a physical manifestation of SoHo Memory Project look like? From time to time, I have wondered if SoHo will ever have a brick and mortar museum or historical society, a hub where our community can celebrate SoHo, past, present, and future. It has never had one, but it certainly deserves one.

That’s why I was so pleased to work with Interior Architect Ewa [EV-ah] Podgórska last spring on a project that combines adaptive reuse and biophilic design in her vision for a brick and mortar museum of SoHo history at an existing site on Mercer Street. Ewa imagines galleries, community space, meeting rooms, artist studios, and a vertical garden in her just-completed master’s thesis in Interior Architecture from the Rhode Island School of Design entitled BIOPHILIC DESIGN IN ADAPTIVE REUSE: The SoHo Memory Project.

During a time of rapid change in SoHo, Ewa seeks to answer several questions (see below), the most central of which is:

In a place that is losing its collective meaning, can a physical location of the SoHo Memory Project assist with creating a neighborhood locus that would bring back a sense of community to SoHo?

“The physical location for the Soho Memory Project can be a center for both the community and visitors to congregate,” Ewa says. “A place where the community starts to rebuild, where history is exposed and the future is charted. It can be the backbone that will support the next stage of SoHo’s transformation.”

While strictly theoretical, it is nevertheless an interesting exercise in identifying the essentials to carry into the future and in pushing the boundaries of what is possible for the SoHo community.

New York City’s SoHo neighborhood is dubbed as the poster child of adaptive reuse in America. Lush wilderness pre-colonization, the area was transformed to farmland and freed–slave settlement in the 17th century, wealthy residential, entertainment and later, a red–light district in mid–19th century, industrial center pre-war, and a hub for artists in the 1960s. SoHo has redefined the role of art in society, gave us loft living, creative placemaking, and—literally—the SoHo Effect. Nowadays, however, the neighborhood has lost its unique character and sense of community, becoming an archetype for urban homogeny and gentrification, fate shared by many cities around the world. Question remains: What is next for SoHo?

SoHo Memory Project (SMP) is an organization whose mission is to document and preserve the area’s past, believing that SoHo’s future can only be charted successfully if informed by its history. The neighborhood is missing a historical center/exhibition space, where locals and visitors alike could discover its rich past. It desperately lacks a place where the community could congregate, socialize and organize. The community recently lost a battle to preserve the last remaining green outdoor space, the Elizabeth Street Garden.

This project creates a physical location for the SoHo Memory Project that also serves as a community locus, and brings back artists to SoHo, offering artist-in-residence opportunities. Housed in an iconic cast-iron building—which has also had many lives—currently owned by one of SoHo’s last artists, the center allows for an active interaction and engagement with the local community and the broader public, triggering a memorialization process that will help shape SoHo’s future. The interior of the space reconnects the users with the much-needed nature through biophilic design features, recalling the deep memory of pre–colonized Mannahatta. The latter informs the design concept, inspired by the kinetic sculptures by the building’s long–time owner, honoring the memory of the site itself.

In a place that is losing its collective meaning, can a physical location of the SoHo Memory Project assist with creating a neighborhood locus that would bring back the sense of community to SoHo?

How to balance a space that serves as both a historical center/exhibition space and a community hub? What would a design of this hybrid entail?

In a place of constant change that is New York City, how can one building honor the multi–faceted history of a neighborhood, reflect on the present and help to shape its future?

Considering the recent loss of SoHo’s only public garden, how can biophilic design be applied in an adaptive reuse project to create an inviting multi-use space, offering SoHo’s community access to nature in both direct and indirect ways?

What is a creative way to design a space for the SoHo Memory Project given the real–estate realities/pressures of today’s SoHo? 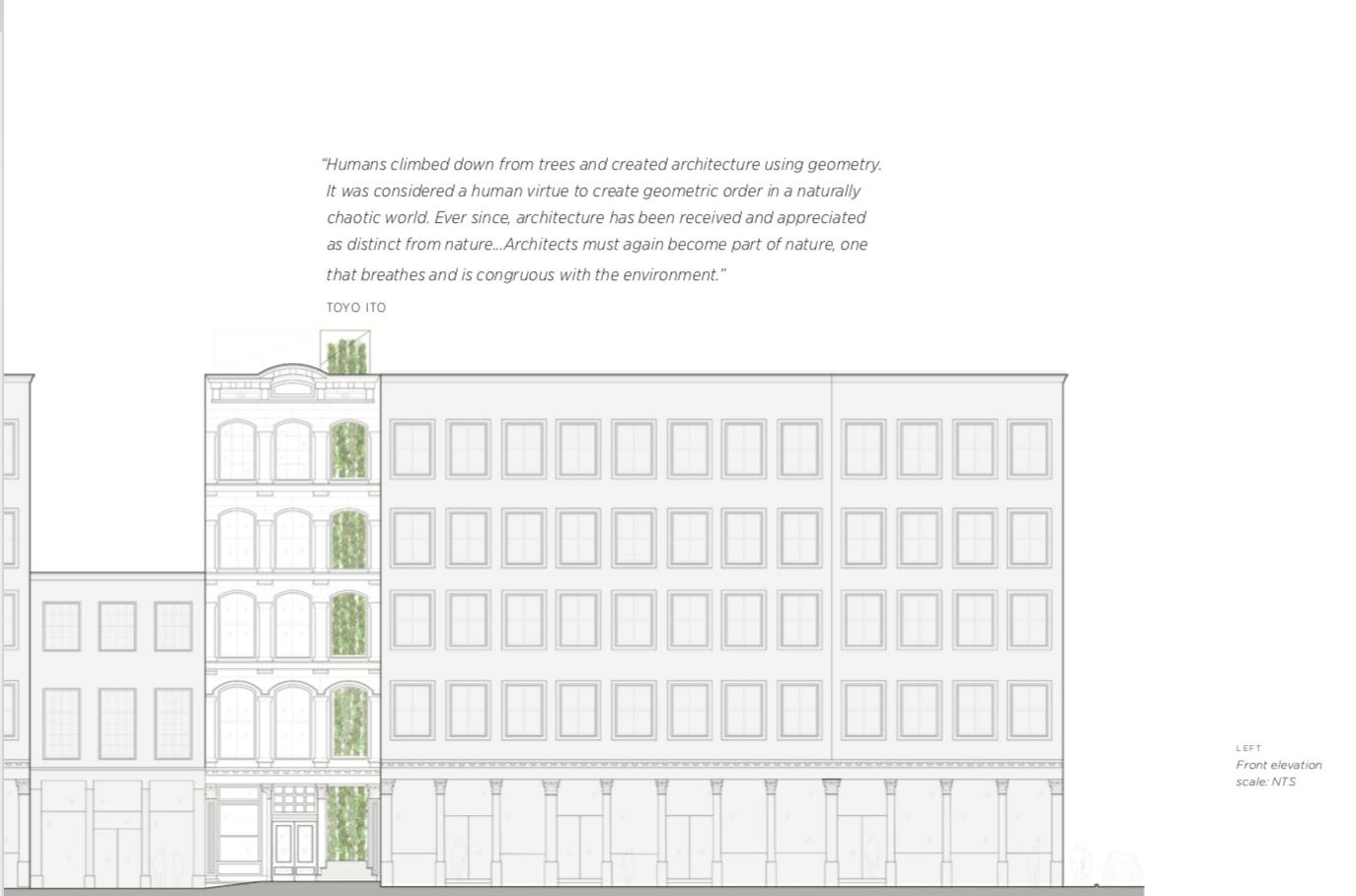 Design to reflect the memory/history of the building, its owner, and the unique SoHo location and its memory

To implement biophilic design patterns in an adaptive reuse project

To create a refuge space in the middle of a dense neighborhood that will engage with the community; an open and welcoming space for both the community members and visitors

Ewa (pronounced EV-ah) Podgórska is a graduate of the Rhode Island School of Design’s Master of Interior Architecture. She is a Founder and Principal of Sova Studio, a New York-based full-service interior design firm focused on creating bespoke, nature-inspired interiors rooted in wellness. Ewa holds both the WELL AP and LEED Green Associate certifications, leading credentials in human wellness and sustainable design, and has been a recipient of a number of fellowships, scholarships, awards and grants. For more on Ewa and Sova Studio, please visit https://www.sovastudio.co. Feel free to reach out to her at ewa@sovastudio.co