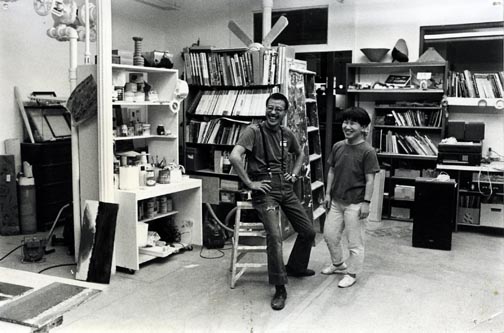 Ichiro and Fusako (my parents)

My parents having fun at work

My dad  came from Japan to the United States in 1965 to see the World's Fair in Queens and never left.  My mom, a nurse in Japan, arrived in 1967 to join my dad, and they moved to SoHo in 1968, taking over their friend’s loft on Crosby Street.  In Japan, my dad did demolition work with his father, and he was also a painter.  After he moved to SoHo, he started working in antiques restoration and then went off on his own doing custom design and carpentry work for businesses and residences, and my mother, always the friendly face of the business, managed the entire enterprise.  An aged Carey Grant once popped in to see their lacquer tables and my mother was so embarrassed as she led him through my father's messy studio.  Throughout the 70’s and early80’s they built many Japanese restaurants in New York and across the south and Midwest, including Yama and Honmura An in Manhattan.

Back when we lived on Crosby Street, my dad rented a floor in a building two doors down that he used as his workshop.  The building in between our house and the studio was a one-story garage, so we had an unobstructed view of my father working from our window at home.  My parents hooked up toy phones connected by a wire strung between the two buildings so my dad could order his lunch, which was sent in a box hooked to yet another wire strung between the buildings (think laundry line on a pulley in the airshaft of a tenement building with a bento box hanging from it).  Once, on a windy day, the lunch flew off the wire and onto the roof of the garage.  I remember being so distressed that my father did not get his lunch!

My father as a young man, painting in Japan

As SoHo developed, so did my parents’ business.  We moved to Mercer Street, and my parents opened a street-level showroom nearby featuring my father’s work, mostly lacquer furniture and screens.  This coincided with the beginning of a craze for all things Japanese, especially sushi, and my father was swamped with work, a blessing, but also a curse.  He never had time for his painting, but was able to use his talents painting lacquered screens for the increasingly wealthy new residents of SoHo and the greater New York City area.  My mother also never went back to nursing, but she voluntarily severed ties with her former profession when she stepped on the boat (yes, BOAT!) to come over here.

My parents are two of the so-called lucky few original SoHo residents who were able to stay.  Because their business grew and changed with the neighborhood, they were able to afford the rise in the cost of living and to raise two children and send them to expensive private universities, something that was not an option for themselves growing up in postwar Japan.  But this meant that my father, originally a painter, had to stray from that path and go into general contracting and interior design.  I don't think he has any regrets, but if he could turn back time, who knows?  Now retired  at 70, he is painting again, after  years of hard work that included some creative expression but also a lot of practicality, and my mom, in her mid-60’s, also retired, is able to pursue her hobbies full time, signing, dancing, and poetry writing.

Is this a story with a happy ending?  Yes, of course it is.  But who knows what could have been?  C'est la vie, que sera sera, and all that.