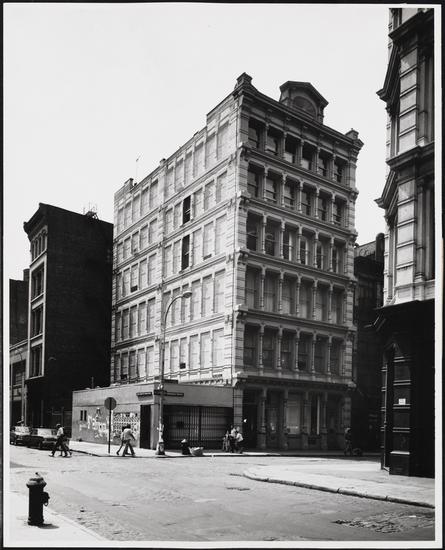 From City Walls to City Malls: Public Art in SoHo

Public art was kind of a new concept in New York City in the 1970's, so I think we were lucky to have numerous wall murals in SoHo. Actual murals, not ads for DKNY or Knob Creek. The ones that stick out in my mind were the mural at West Broadway and Houston by Jason Crum and the mural at Mercer and Houston by Dorothy Gillespie, but there were lots of others in and around the neighborhood.  And then there are the two that are still up, namely, the trompe l'oeil mural by Richard Haas at Prince and Greene and, of course, "The Wall" by Forrest Myers at Broadway and Houston, which is also called "The Gateway to SoHo."

I saw the Dorothy Gillespie mural on the corner of Mercer and Houston every day.  I never liked it very much, its pale, pastel colors looked faded and dull to me long before the mural actually started to fade.  But the sight of it signaled that I was almost home, so I found comfort in it nonetheless.  I also saw the Jason Crum mural on an almost daily basis on the way to and from school.  That one, with its bright primary colors and sharp graphics, appealed more to my five-year-old's aesthetic sensibilities. Many of the neighborhood murals, including the Crum painting, were sponsored by City Walls, a not-for-profit organization, established in 1969 by Crum and others, that worked with artists and communities to revitalize New York City through public art.

SoHo was not the lively hub of activity back then as it is today. The murals of City Walls and others added a much needed splash of color to an otherwise pretty drab landscape.  They also introduced me to modern art in a way that was at once in-your-face and subtle.  The murals were huge, colorful and hard to avoid, but they were also there, day after day, so they kind of receded to the periphery of my consciousness, melding with the rest of my surroundings.  Such is the power of public art.

Nowadays, it is too lucrative to sell wall space in SoHo to advertisers for building owners to pass up offers in the interest of beautification.  In this way, wall murals have become an art form seen only in low-income neighborhoods, where the alternative to artwork is a blank wall.  And thus, at least in SoHo, the wall mural has been supplanted by the billboard.  Such is the power of commerce.

THE WALL (1973) by Forrest Myers on Houston at Broadway