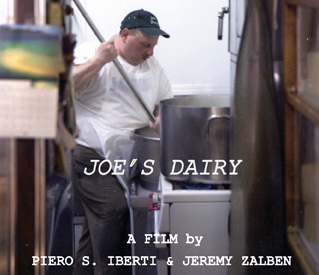 Although technically not in SoHo, there isn't anyone who would argue with the fact that Joe's Dairy on Sullivan Street was a part of our SoHo past.  The fresh, creamy mozzarella, made by hand daily by Anthony Campanelli, will be missed by all.

Campanelli is an artisan who earned his living by working with his hands, putting in long hours practicing his craft.  He did not use machines and he did not sell to chain stores.  The closing of Joe's Dairy signals the passing of an era, as is evidenced by the near-extinction of "mom and pop" stores in a city that was built on moms and pops.

Native New Yorkers Piero S. Iberti and Jeremy Zalben have made an excellent documentary about Joe's, just in the nick of time. Joe's closed its retail store suddenly in May of this year, just as the filmmakers were finishing up.  Their film, Joe's Dairy, tells the story of a neighborhood institution and depicts an old New York that is quickly vanishing.

Joe's Dairy is a classic New York City shop that sits tucked away on Sullivan Street just south of Houston Street in the heart of downtown Manhattan. One could just as easily pass by unaware of its presence as he or she could stop in and be wowed by its tiny dimensions and the sheer volume and quality of fresh mozzarella that is produced within it everyday.

Joe's has been Joe's for close to 80 years now, but for 39 of those most recent years, it's belonged to owner Anthony Campanelli and his family. The film chronicles the history of the store, shows how the famed mozzarella cheese is produced and explores the existing relationship to the ever-changing SoHo neighborhood surrounding the shop.

The city has lost a tremendous cultural force with the closing of Joe’s. It has also lost a piece of its identity and what makes New York, New York. One of the main motivations we had in making this movie was to capture that old New York feel that still existed because of shops like Joe’s. Now that feeling is on the verge of extinction. With less and less "mom and pop" stores around to provide that character, I’m not sure it's possible to retain it anymore.

—Piero Iberti (from an interview for Jeremiah's Vanishing New York)