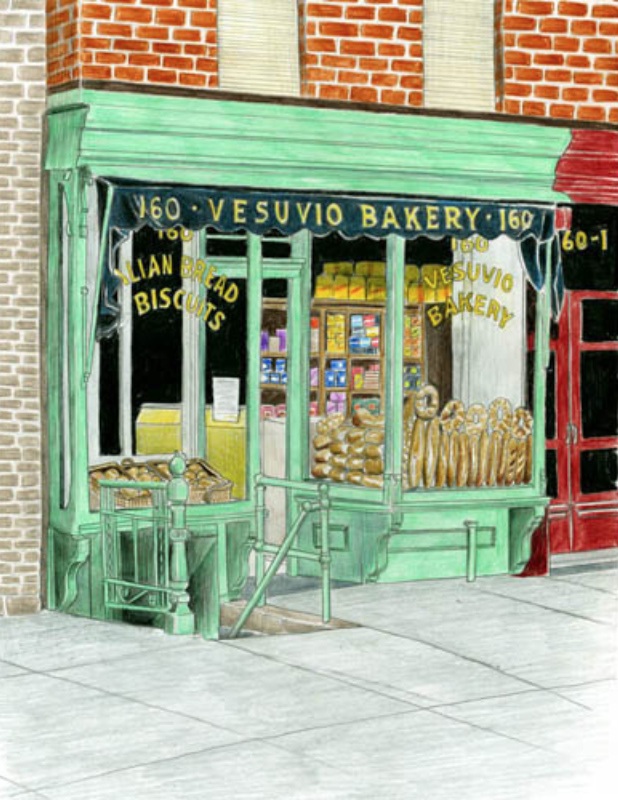 Christine Berrie’s vibrant drawing of the infamous Vesuvio Bakery storefront, drawn before the it became Birdbath, when loaves of bread filled its windows (until it sold out) and Tony Dapolito was behind the counter.

Happy summer! We’ve already entered into the dog days of August, so I thought I’d write about something light and cool.

SoHo has appeared in myriad media: photography, film, writing, spoken words, all of which have been discussed here. What about drawing, the oft overlooked yet most democratic of visual art forms? I thought it would be fun to look at some of the many ways SoHo has been drawn by artists, illustrators, architects, and children!

This hand-drawn advertisement for Dundas Dick & Co.’s Tasteless Medicines gives us a glimpse into what SoHo looked like before SoHo was SoHo. In 1876, 35 & 37 Wooster was a “manufactory” of medicines that were distributed internationally, according to the writing on the crates along the sidewalk. This building is now home to none other than The Drawing Center!

Here’s another building we all know and love. 101 Spring Street, home of Judd Foundation and former home and studio of artist Donald Judd and his family. This drawing by Arthur Getz for The New Yorker is of the building’s pre-2013-restoration facade. Drawing of a loft interior by Jeremy Stratton (age 5)

This drawing is from Jim Stratton’s 1978 book Pioneering in the Urban Wilderness: All About Lofts, where he writes:

How loft construction affects the child’s perceptions. Jeremy (age 5) conceives of his loft building in three stories. His double-bunk shares the top floor with a bowling alley, there’s a carpentry shop on Two, and a kitchen and bathroom on One. Note the mouse still in residence on the second floor.

This October 4, 2011 “sketch of the day” by Stephen Garnder depicts the scene at Fanelli’s, probably the only place in SoHo that has remained pretty much the same over the years.

The 1995 edition of the SoHo Guide, an annual index of SoHo’s businesses and arts organizations published by the SoHo Partnership, includes drawings of SoHo streets by Robert Miles Parker.

The Noodle-Cutting Machine by Maira Kalman from the July 21, 2014 issue of The New Yorker

Here’s another one from The New Yorker: a drawingby the fabulous Maira Kalman of the noodle-cutting machine at Rafetto’s on Houston Street that she calls “a rickety, clackety, gorgeous gizmo—and reliable, too.”

Simon Fieldhouse’s drawing of SoHo fire escapes, one of the iconic features of so many New York buildings.

The Stupid $30,000 Purse Store by Roz Chast from her book Going into Town: A love Letter to New York

Nowhere in her most excellent and hilarious book Going into Town: A Love Letter to New York does Roz Chast say that this store is in SoHo, but I’d like to think it is, so I include it here. This book is a must must read for all New Yorkers! And last, a look into what SoHo could have been. This is a rendering by architect Paul Rudolph of the interior of the “HUB,” which was to be part of the proposed Lower Manhattan Expressway. If built, the multi-lane highway would have run down Broome Street from the Hudson to the East Rivers. Complete with monorail-mounted “people movers,” the HUB was to be “a transportation interchange that connects the two eastern legs of the Expressway to existing subways, surface roads, pedestrian walkways.”