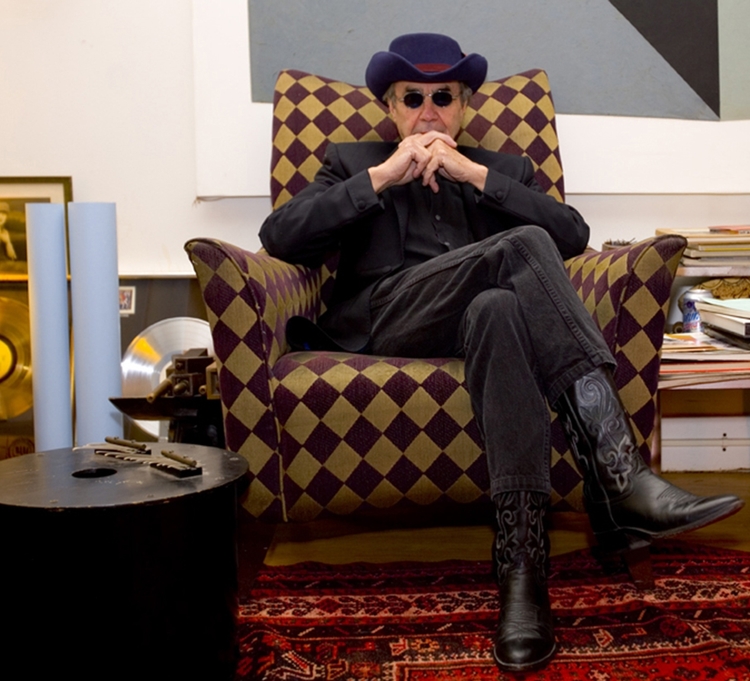 “People can be uncomfortable when you do a lot of things.”
—Dickie Landry

True Renaissance man and renowned jazz saxophonist Richard "Dickie" Landry is so much more than his first claim to fame (as a musician). Dickie has performed his music throughout the world and was a seminal member of the Philip Glass Ensemble. He is also well-known for his photography, a medium he found almost by accident, and is now gaining much recognition as a painter. To add yet another item to this list, Dickie oversees an 80-acre pecan farm in Cecilia, Louisiana. And, in a pinch, Dickie also plumbs.

As he says in my interview with him below, Dickie only lived in SoHo for 6 months in its early heyday, but he was an integral part of the SoHo arts community of the 1960's and 1970's. The catalog from his 2014 photography exhibition Dickie Landry's New York: 1969-1979 at the Paul and Lulu Hillard University Art Museum of the University of Louisiana documents these years through many wonderful portraits of his friends and co-conspirators including Keith Sonnier, Philip Glass, Robert Rauschenberg, Joan Jonas, and Moondog, among many others. Click here to see Dickie's photographs.

To get a fuller understanding of Dickie's full body work and what it was like to be in the New York art world of the 70's, do watch the film "Dickie Landry's New York Stories" by Tabitha Denholm (see below) and visit Dickie's website.

Interview with Richard "Dickie" Landry for The SoHo Memory Project

1. What brought you to New York, and SoHo specifically, and where did you come from?

I first went to NYC in 1956, I was right out of high school.  I drove with a friend in his 1956 red and white Corvette.  No interstates in those days, 30 hour drive.  When we arrived in the city we drove straight to the famous Jazz club “Birdland.”   Saw Miles Davis, Bud Powell, Philly Jo Jones and others.  As I was a total jazz freak, I was hooked on the city.  I went back a few summers after that and heard just about everyone who was someone in the jazz world.  I did not know anything about SoHo in those days.

I came from the small village of Cecilia, Louisiana.

Philip Glass "Glass in the Sky" (1977) by Richard Landry. Philip Glass at a performance for Art on the Beach on the World Trade Center landfill in the Hudson River. I catch a skywriter writing an ad for a glass company.

2. What was everyday life like in SoHo back then?

Every day life was a struggle to keep ahead with $. I did what ever I had to to survive.

I worked with Phillip Glass as a plumber and as a performer in his newly formed ensemble,  I also worked with Richard Serra. Photographed Nancy Graves, Joan Jonas, Keith Sonnier, Lawrence Weiner, Steve Reich, Jon Gibson, Mabou Mines, Robert Wilson.  I also  traveled the world with Robert Rauschenberg opening his exhibits with my solo saxophone.

Hung out a lot at 112 Greene St., it was the hang out for many artists. It was one of the first alternative spaces in the city.  It was owned and run by Jeffery Lew.  The space was open 24 hours a day and artist could do whatever they wanted to do in and with the space.

When I first moved to the city I lived at 98 Horatio St. in the West Village, a couple of blocks from the New Whitney.  Then I moved to a sublet on Grand for six months.  Chinatown at 10 Chatham Sq. for six years. Then to Thames St. 2 blocks from the Trade Towers, this building was destroyed by fire in 1978.  I then moved to 125 Cedar, 8th floor.  The building was directly across the street from the South Tower of the World Trade Towers.  I had the apartment for 24 years.  I moved to Louisiana several months after 9/11.

My hangouts were, Max’s Kansas City, Studio 54, One Fifth Ave (where ever Micky Ruskin had a club and or restaurant.)

2.  What is one of your most vivid memories of living in SoHo in the early days?

The incredible number of art galleries and my friends.

6. What is going on in this photo (above) of you and your friends standing in what looks like a pile of rubble?

We are enjoying roasted pig that Gordon Matta-Clark cooked that day for the 80th year celebration of the Brooklyn Bridge.  It was an art event sponsored by Alanna Heiss’ (founder of P.S.1). She invited a number of artists and musicians to install and perform their works.

7. How did you come to take the now-iconic photo of Gordon Matta-Clark, Tina Giroud, and Carol Goodden outside Comidas Criollas during the construction of Food?

I was married to Tina Girouard at the time and I had also was working with Gordon.  I was photographing his work and also helping him cut the buildings.  That photo was taken the first day they got the keys to enter the building to start constructing.  The writing on the photo is in Gordon’s own handwriting.

8. Where do you live now and what are you up to these days?

I live in Lafayette, Louisiana where I am close to my 80 acre pecan farm in Cecilia, a fifteen minute drive. The farm maintenance is lot of work but I call it fun. I am busy with my photograph and painting shows.  Recent shows:  Fort Gansevoort Gallery in NYC and a retrospective exhibit of all my work, photography, paintings, drawings and videos at the University Art Museum at Laramie, Wyoming.

This summer (2017) I will be working with Robert Wilson as a composer on the play Oedipus Rex with workshops at his Watermill Center summer of 2017.  Rehearsals begin in April and premier in October 2018 in Vicenza, Italy in one of the oldest theaters in Europe, Teatro Olimpico. The theater was built in 1585.

In May of 2018 I will be performing my Catholic Mass, “Mass for Pentecost Sunday” at the Rothko Chapel in Houston, Texas.  I was commissioned to compose the Mass by Dominique DeMenil for the opening of her collection, The Menil Collection in 1985.  The re-creation is part of their 30th year celebration of the opening of the museum.

In March of 2018 I will be performing a saxophone solo concert in the Byzantine Fresco Chapel.

In the meantime I am trying to keep up the farm from the weeds and grass that grow like crazy in the humid, hot South Louisiana summers.

A film by Tabitha Denholm

The filmmaker delves deep into the life and work of saxophonist and photographer Dickie Landry, whose ingenuity and artistry knows no bounds. Read the full feature on NOWNESS.