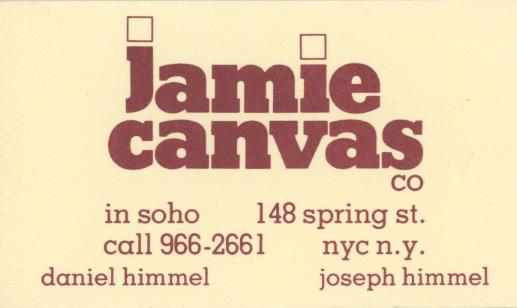 My father, when he was walking out the door, often used to say to me, “I need to go to Jamie Canvas,” or “I’m stopping at Jamie Canvas on my way home.”  I always thought Jamie Canvas was a person, someone he was going to visit.  But as many of you may remember, Jamie Canvas was an art supply store on Spring Street that sold, among other things, lots and lots of canvas.

I recently sat down with Daniel Himmelfarb, who opened Jamie Cavas in 1972 when he was 25 years old, at Housing Works Bookstore to talk about his shop.

After working at several art supply stores, including Pearl Paint, and also selling canvas out of his studio apartment on Carmine Street, Himmelfarb took over a small retail space at 151 Spring Street where the rent was $200.00 a month, an amount that seemed rather exorbitant to him at the time.  To build up a clientele, he made up business cards and flyers that he distributed throughout the neighborhood, placing them in AIR (Artist in Residence) boxes of loft buildings.

Jamie, for whom Jamie Canvas is named

Named after Himmelfarb’s then girlfriend, Jamie, the store became a kind of hub for local artists.  In 1976, he expanded by moving into a larger space across the street, where he sold art supplies and toys until he closed 1986 because his landlord, Manny Lehrman, who “looked like Nelson Rockefeller and talked like Nelson Rockefeller but was Jewish,” raised his rent.  The space is now a Doc Marten store.

Back in the good ol’ days, Jamie Canvas was patronized by a cast of local characters.

Philippe Petit once showed off his talents by balancing a paintbrush on his head, and then tripped on his way out of the store. Hannah Wilke came in to rant about how her freighting company, not realizing that her “vulval” sculptures, made from chewing gum, were works of art, lumped them all together into a huge wad and shipped it as a gum ball.  George Horner, whose medium was Silly Putty, had Himmelfarb order tubs of it wholesale.  In the later years, after he acquired a color Xerox machine, Jean-Michel Basquiat used to stop in to make photocopies of his drawings that he would later glue onto canvases.  He even once left a drawing behind that Himmelfarb kept as a souvenir.  Andy Warhol also came in:

Warhol bought a lot of toy boxes, Russian and Eastern European toys, and did a series of small paintings from them and hung at children s height.  All the images were taken from my carefully chosen art toys.  But they were meant as toys, not art.  The art was accidental, unlike KidRobot.

When I asked him what he misses most about old SoHo, he said he is nostalgic for the small-town feel of the neighborhood.  Everyone knew each other and everyone was excited about each other’s work.  There was a community support system that disappeared when the neighborhood reached a critical mass and then its members were dispersed into a far-reaching diaspora.  He misses the realness and grittiness of SoHo, the “authenticity of an Italian Neo-Realist film” that is long gone.

What ever happened to Jamie, I asked.  Himmelfarb is not in touch with her.  Even before he closed the Spring Street store, he married someone else, and his wife was the one who lobbied against changing the store’s name to “Suzanne Canvas.”