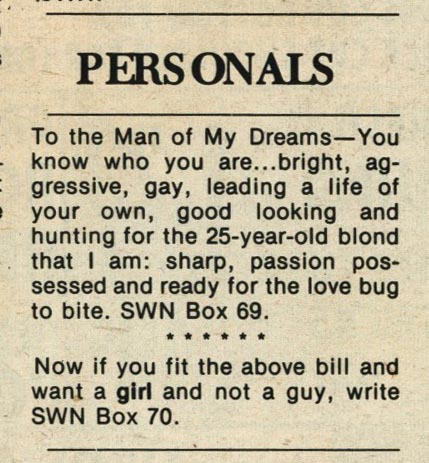 All the News That's Fit to Print, SoHo Style

The other day, I was given a treasure trove of SoHo memory in the form of two boxes full of issues of The SoHo Weekly News from 1974 and 1975 (thanks, J and C!).  I remember seeing the paper lying around the house and probably used it for more than one paper mache project, but I cannot say that I was a regular reader.  I’m sure you older folk read it religiously for local news and listings, in the way that I read the Village Voice in the mid-1980's when I was a young, single person looking for culture, high and low.

We are planning to report what's going on down here honestly and fairly. To do that we need your help--in telling us your problems, filling us in on what's happening and keeping us generally informed. (Vol. 1 No. 1 in October 11, 1973)

The Soho Weekly News began with modest intentions in October 1973. Founder and publisher Michael Goldstein once said he started the paper so that Soho residents could stop hanging fliers everywhere to let other residents know what was happening. In effect, it was a neighborhood paper meant to focus on local news, with the expectation of adding of local arts coverage. (source)

I have not yet gone through the boxes I received, but I pulled out a random stack of issues from the latter half of 1974 and flipped through them.  Among the many fabulous things I came across were an article about an up-and-coming musician named Bruce Springsteen, an ad for CBGBs with The Ramones and Blondie performing on a Sunday night, an interview with John Cage, and a movie listing from the Bleecker Street Cinema.  I am so looking forward to unpacking all of the issues to see what else I may find.  In the meantime, here are some highlights of what I’ve uncovered thus far. I'm not sure I understand this personal ad

Love these letters to the editor

An interview with John Cage An article about an up-and-coming singer named Bruce

Today residents decry the spread of commercial establishments along Bleecker, but once upon a time this was welcomed