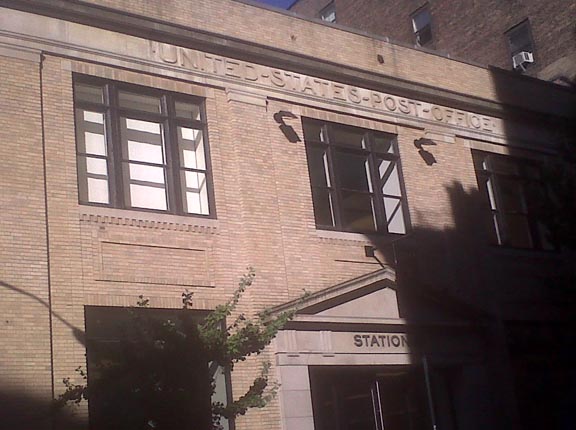 I used to hate it when my mother sent me to the post office when I was a kid.  I'd go in there to send a package for her and EVERY TIME I got to the clerk, he or she would invariably tell me that I had filled out an incorrect form and had me stand aside to fill out a longer and more complicated but correct form. Or I would be told that I did not have the correct form of ID to claim a package and I would be sent home to fetch it.  I would leave, tears streaming from my eyes, cursing the postal service and their complicated bureaucracy.

Our postal carrier, Audrey, has ONLY been delivering our mail since 1987, so she doesn't even qualify to be profiled in this blog.  But on Audrey's watch, something happened that reminded me that SoHo is (or at least WAS) a community of interconnected people and not just a random group of anonymous yuppies.  In the 1990's I worked for a publishing house at 568 Broadway, on the corner of Prince above Armani Exchange.  A publisher in Korea once sent me a package, but he sent it to an incorrect street address (586 instead of 568, or something like that).  The package should have been sent back to Korea, but, luckily, Audrey spotted it at the 10012 home office and recognized my name.  She took the package and delivered it to my HOME that same day, and the next day, I brought the package in to work.  Now how's that for small-town service?

Built around 1920 and designed by renowned theater and cinema architect Thomas White Lamb at Prince and Greene Streets, Prince Street Station always seemed too grand a post office for our dirty little neighborhood.  For a long time, it was kind of echoey and gloomy in there, but then the neighborhood began to bustle and, lo and behold, this was precisely when the USPS was forced to close up shop and squeeze the Prince Street Station into what was probably their former supply closet around the corner on Greene Street.  I suppose budget cuts and rent hikes coupled with the rise of FedEx, UPS necessitated this move, but the new abridged, overcrowded, and understaffed post office was just asking for someone to, well, go POSTAL. Then, due to further rent hikes, that office also closed, and we were left with no post office at all.

After 80 years of continuous service, my old post office, following a brief stint as a Restoration Hardware, is an Apple Store.  Stayed by neither snow nor rain nor heat nor gloom of night, Audrey and her cohort were defeated at last, by none other than Steve Jobs. P.S. Just as an aside, does anyone remember the key guy who had a little shop right next to the post office on Greene, where Alessi is now?  It was this tiny space and he'd be in there sleeping all day.  He'd wake up every once in a while to make me a key.  And then one day he was gone.  I don't even remember when.