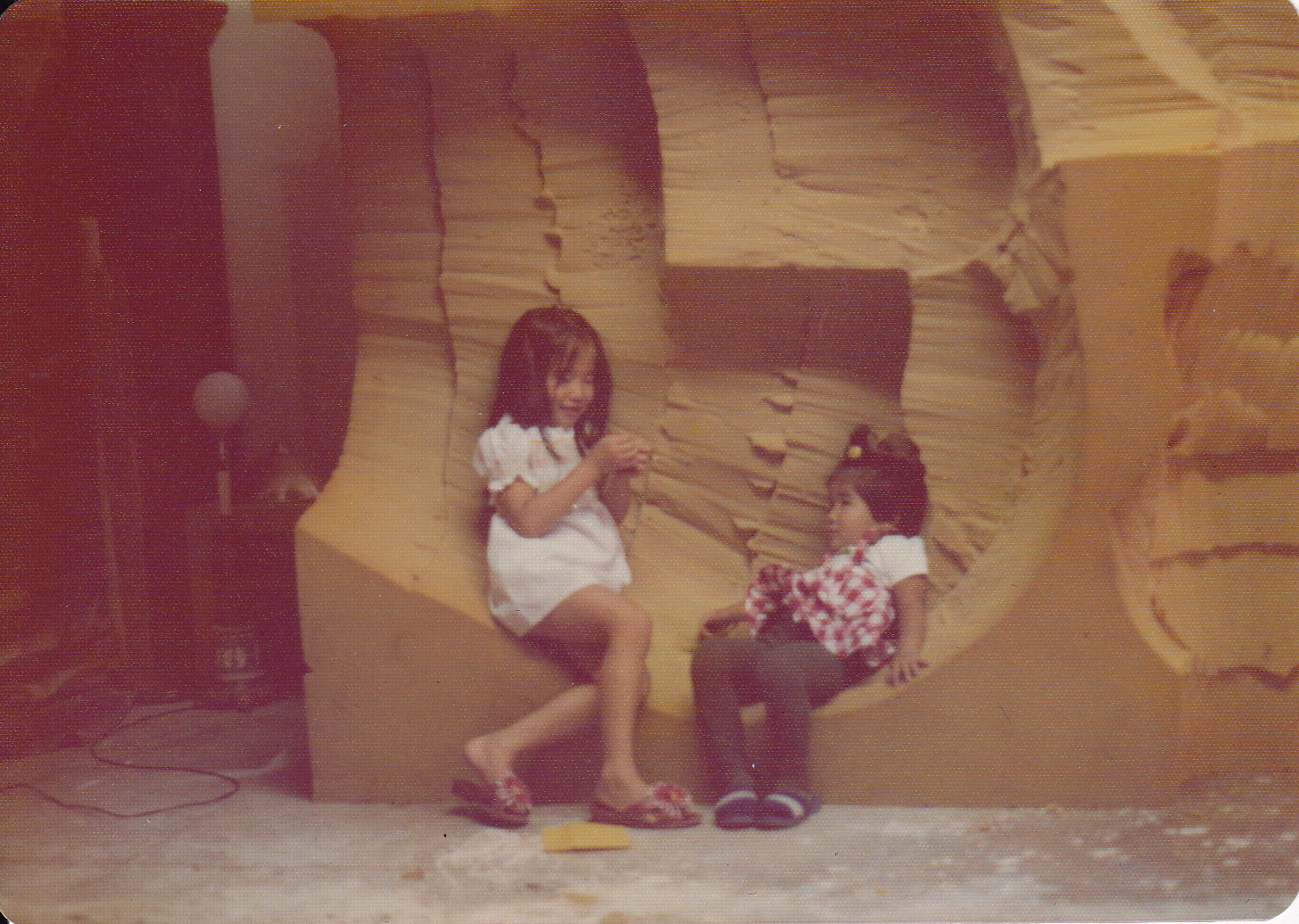 Yukie and Mimi playing on a sculpture left in their new loft by a previous tenant, 1976

My husband, daughter, and I live with my parents.  Well, that's not 100% true.  We live with a sheetrock wall separating us from my parents in the loft building where I grew up.  When we decided that we wanted to have a child, my husband and I found that we could not really afford enough space to live comfortably in New York City, but there was no question of us moving away.  At the same time, my parents, empty-nesters, had TOO MUCH SPACE.  Imagine that!  In New York City!  So they offered to let us build our own apartment within their loft space and we could share overhead expenses on an ability-to-pay basis.  This was an offer we could not refuse.  After all, the space was basically being used to store old furniture and junk anyway.  So that's how a struggling designer (now ex-designer) and a struggling painter could afford to have a child and live in SoHo.

Three generations of my family live under the same roof, where I grew up

After we moved to Mercer Street, I began to realize that our situation was not unique.  First of all, my sister lives in our building too, though on a different floor.  Also, I kept running into SoHo old-timers around my age who either did the same thing we did by splitting their lofts in half or who inherited their lofts from parents who had moved away.  It is a twist on the whole "boomerang generation" phenomenon of adult children moving in with their parents because they cannot afford to live on their own.  But our situation is also VERY different.  Those of us who live in our childhood homes in SoHo are not only proud to be back, we feel it is our birthright to still be here.  After the galleries and then the retail stores moved in, real estate prices soared and many of my old friends and their families had to relocate.  Through luck and a little ingenuity, my family was able to stay as our world changed around us.

There are other people I know who were married when they moved into their lofts in the 1960's and 1970's, got divorced, split their homes in half, and continued to live as neighbors.  A recent New York Times article profiled Shael Shapiro (author of Illegal Living, a book about the evolution of loft living in SoHo and a must read!) as one of a rare breed of New Yorker who has lived through many life phases at the same address.

I must say that it is often very difficult living in SoHo.  The streets are always crowded and I often get dirty looks from people who seem to think that my stroller takes up too much space on the sidewalk.  I also cannot afford to shop at most of the local boutiques and stores or to eat at many local restaurants.  Nevertheless, it is where I want to be, at least for the foreseeable future.   It is what I know.  It is what I love.  It is my home, sweet home.