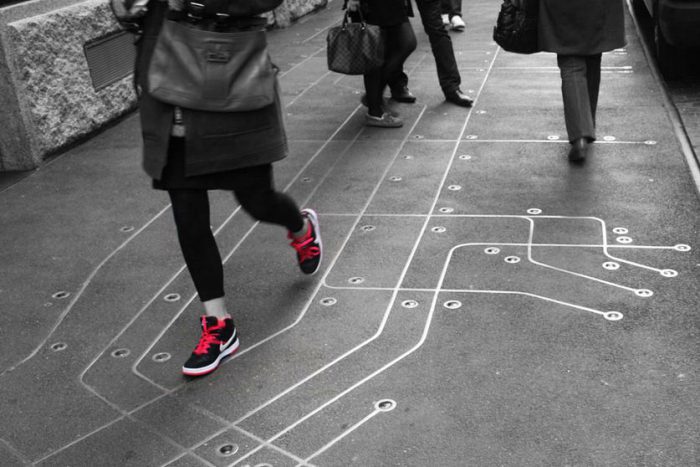 I recently had coffee with Sascha Mombartz and Anastasija Ochetertina of Art Walk NYC. Art Walk is the brainchild of Sascha, an art historian who makes it his business to explore the city’s vast art and architectural treasures and unravel the stories behind them. Through his research into the history of SoHo in the 1970s, he uncovered many works of art that are hidden in plain sight, and it is these pieces that are incorporated in his SoHo Art Walk that includes stops at the Bust of Sylvette at the Silver Towers and Frosty Myers’ “The Wall” at the corner of Houston and Broadway. His walk also incorporates works that are underfoot, encouraging us all to look down as well as up. There is a stop at Francoise Schein’s “Subway Map Floating on a NY Sidewalk” on Greene Street and Ken Rock’s sidewalk art at the corner of Broadway and Prince. The subway map piece was clearly a sanctioned project, as it was funded and commissioned by Tony Goldman of Goldman Properties. The sidewalk art was clearly not. In a 2006 New York Times article about his work, Ken Rock, who arrived in New York in 1980, is quoted as saying:

"The street lamps were shot out, broken, all the graffiti everywhere." He decided the corner needed life, it needed art. He asked no one's permission. Although the sidewalk carving took only about five hours, the process took two years, 1983 and 1984, as Mr. Hiratsuka chiseled away in the dead of night until a police car rolled up and scared him away. "I got chicken, so scared," he said. "I can't go back, can't carve anymore. But two months later, I was ready again."

I never knew the story behind the chiseled sidewalk that I trod upon almost daily until Sascha told me about it. The story got me thinking about other examples of street art in NYC and whether they would fall into the Francoise Schein category of sanctioned public art or in the category of Ken Rock’s guerrilla art, and where the line that separates them falls.

A piece by Banksy in Williamsburg with a person holding a newspaper whose headline reads "Get Banksy!"

The first example that came to mind was Banksy’s recent visit to New York City. His poignant yet often hilarious works, many of them painted on the sides of buildings, were certainly not sanctioned, painted furtively, almost as if they just appeared out of nowhere. There were rumors that the police were after him. Building owners and others tried to remove the art to keep or sell. The most interesting story I saw coming out of the coverage of Banksy’s stay in NYC was from an article on the UK’s Daily Mail site entitled, “The moment three men roughed up a tagger who painted over the latest work by graffiti artist Banksy”:

Three Banksy-loving New Yorkers have fought off a tagger who painted over the British graffiti artist's latest work less than an hour after it was unveiled.  Banksy announced his newest piece Thursday afternoon, a pair of geishas on a 'bridge' painted on the side of a building in Williamsburg, Brooklyn. Photographers captured the moment when, less than a hour later, a tagger attacked the work, covering it with black spray paint.  But before the rogue painter could make a getaway, two men grabbed him. The building's superintendent threw the tagger to the ground and called the cops. …He escaped before police arrived. Two men, who had taken pictures of the Banksy work before it was painted over, quickly set about restoring it. They carefully wiped away the tagger's spray paint with rubbing alcohol.

The defacer of Banksy's work is quickly apprehended by bystanders

So here, a graffiti artist was attacked for tagging on another graffiti artist’s work. The first artist’s work was praised and the second’s was erased in order to preserve the first’s. I can plainly see why, but who is to say one is a street artist and the other is a criminal? I know who—the NYPD.

Mercer Garage on Mercer between Houston and Prince

The other day, I was speaking to the manager of Mercer Garage on Mercer between Houston and Prince about the brand new painting by street artist Bradley Theodore that was adorning (or defacing depending on who you ask) a pair of their doors that were previously covered with spray painted graffiti tags, and he told me that I should take a photo of the doors while I had a chance.

It seems that two undercover police officers told the owner of the garage that he was not permitted to let people paint on their doors, even though there had been other graffiti on them before. A bit later, two uniformed officers came along and told them that someone from the City will be coming to paint their doors green again, thus covering up the painting and all previous graffiti. Meanwhile, another person approached the garage and said that he would pay them for the doors and would also replace the doors with brand new ones. He said that the doors could fetch a high price on the market. The owner of the garage said that he didn’t really know what was going on, only that it seemed that the police had something against Theodore in particular and was therefore singling out the garage for the illegal defacement of their own property. They did not pay Theodore for the painting, he only asked permission to paint it and permission was granted.

SoHo has a long history of this, most notably with the artists Keith Haring and Jean-Michel Basquiat. They, like Banksy and Theodore and Rock, were lauded as great artists and also criticized for defacing public property. And then they eventually reached a point in their careers where they were commissioned, like Schein, to “deface” public and private property. This is a debate that has been going on for ages, here and elsewhere. Who gets to decide what is art and what is not? What is worthwhile and what is not? What is beautiful and what is not? Yes, those in power get to decide in a way, but really we all get to. Sascha gets to. That he includes works by Picasso and Frosty Myers, along with works by Ken Rock and Francoise Schein, and perhaps now Bradly Theodore as well, on his art walks affirms this. Banksy, after his month-long residency on the streets of New York, asked us all, “Don’t we want to live in a world made of art, not just decorated by it?” Indeed. For more information about the SoHo Art Walk, click here.