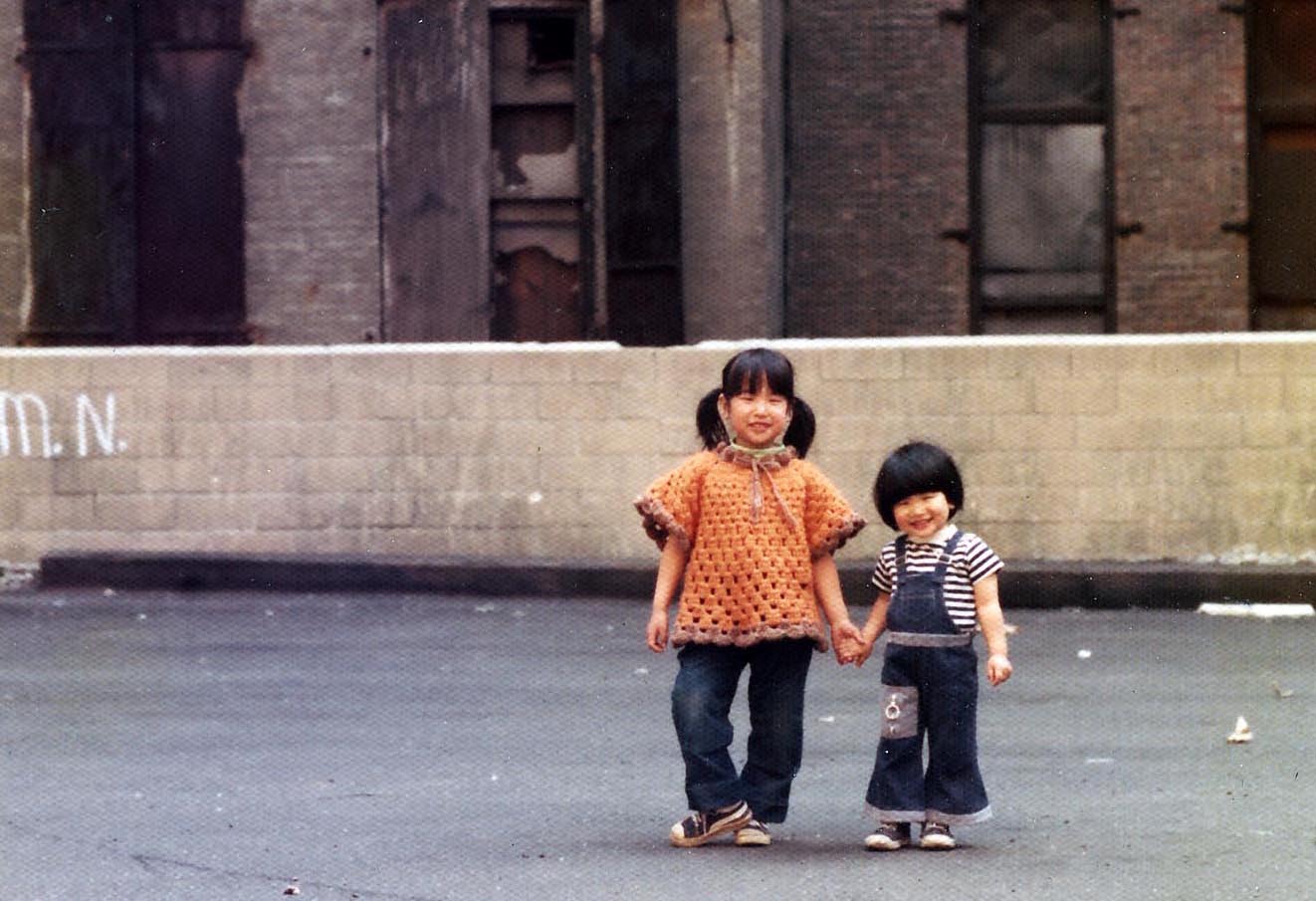 This photo of me and my sister was taken in 1974 in the parking lot on Crosby Street between Prince and Spring, the current site of the Crosby Hotel, where we would often play

Happy birthday to us!  January 1 will mark the second anniversary of The SoHo Memory Project.  I thought I’d take this opportunity to look toward year three by looking back to see how far we’ve come.

On December 5, Avi, my nephew, was born and is living in our building on Mercer Street, right next door, as a matter of fact.  He is the newest member of the THIRD generation of SoHo-ites to live here.  Not many buildings, at least in New York City, can boast that!  Back in the early 70’s, there were a total of four children from two households living in our building.  In 2012, the same four children, now in their forties, are still living in the building and are now having children of their own. We are now a dynasty.

One thing is for sure, Avi’s SoHo Memory Project will look far different from my own.  My sister and I reminisce about the good old days when SoHo streets were empty. We remember that there was no need for traffic lights, as there were no cars in the streets and we could play ball in the middle of Crosby Street in the summer and make snow angels in the middle of Houston Street in the winter.  Avi’s SoHo memories will be peopled with tourists and shoppers by day and finely dressed drinkers and diners by night.  He will remember that parking was a nightmare, unless you could pony up the $20/hour to park in one of two lots in the area (not that he’ll ever learn to drive, as he is a native New Yorker!).

By 1985, the original children of SoHo were already mourning the SoHo of their youth. As Kathleen Brady writes in her 1985 New York Times article:

Theirs was the pioneer SoHo of doorless bathrooms and buzzerless buildings. When outsiders visited, they had to announce their arrival from the corner pay phone. …Now SoHo is chic, and the babies of the late 1960's and 1970's are in their second decade. Already they are nostalgic. Rachael Mason, 13, said: ''It's changed so much! All these modern things are moving in and taking the place of Italian butchers and candy shops. They are being replaced by clothing stores that are very expensive. But the nice thing is there's always a lot going on.''

Twenty-two years later, in 2007, the selfsame Rachel Mason, writes in a post about growing up in SoHo on her blog Superfree:

SoHo was once the domain of cool artists and young families. When we moved in nobody had lived there prior to us: there was minimal plumbing and three inches of dirt on the floor. There were no walls and rats came up through the pipes. I remember sleeping on the floor on a mattress in a sleeping bag and getting dressed under the covers because we didn't have heat. We were living there illegally and the city turned the heat off (they finally had to relent because it was freezing and the pipes would burst, which would have pretty much destroyed the building). We would boil water on the stove and then pour it into the bathtub in order to bathe. It was a pretty crazy existence.

LOFT LIVING This is the front half of our "glamorous" $125/month floor-through loft on Crosby Street with sooty windows on four sides, plastic stapled to the ceiling where it was falling down, furniture mostly found in dumpsters, and, of course, no C of O. But oh so much space!

We just re-lived that crazy existence for four days after Hurricane Sandy came through New York (except for the part about the rats).  Avi had not arrived yet, but my very-pregnant sister stoically made her way up and down our dark stairs and walked miles to get fresh food and other provisions, just like in the old days. But those four days were an aberration that only reminded us how much our lives have changed.  Although we still live in the same building, Avi will never have to sleep in a cold room or make friends with rats.  Our parents, the first generation pioneers of SoHo, made sure of this.  They worked hard to pass on to us a more comfortable existence with smother edges and more heat, and we, in turn, will pass on, to Avi and his peers, an even more comfortable existence, with the luxury of convenience that includes doors on all bathrooms as well as three Duane Reades within spitting distance.

This is the way it should be.  Progress is always preferable to stagnation.  Many of you may ask, at what cost?  I do not know that it matters anymore.  I have my fond memories of youth, thanks to my parents. That SoHo is long gone.  Avi and my daughter will have their own SoHo memories, thanks to us.  They will be very different memories from my own, yet, one can only hope, fond nonetheless.