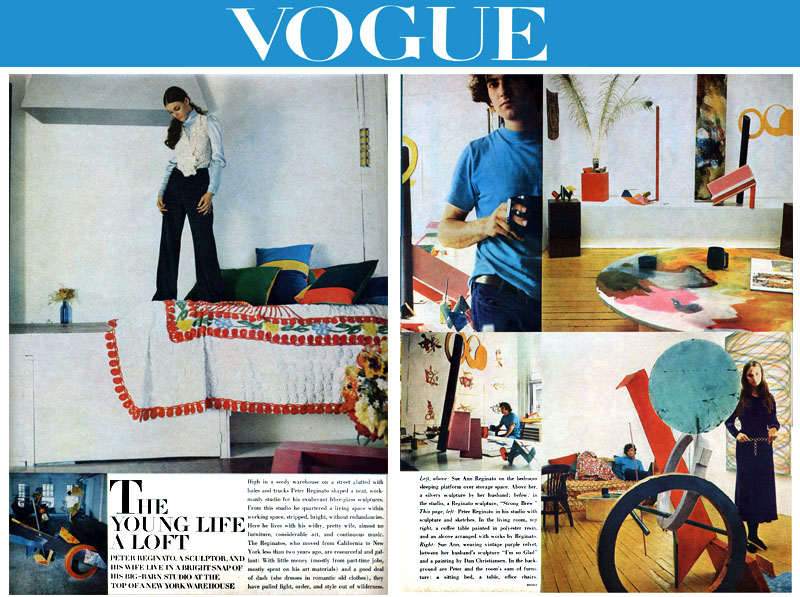 Article about Peter Reginato in Vogue, 1966

Over the years, I've gotten to know quite a few SoHo old-timers through this blog.  People write in, share their memories with me, and I include these memories in my posts.  I recently heard from Peter Reginato, an olde tyme SoHo artist who actually still lives here.  He writes so eloquently about how he got to SoHo, and how it's changed over the years.  Here is his post—a reminiscence from someone who was here in the beginning and still remains (for now, at least), a very rare breed, indeed!

I was going to the San Francisco Art Institute in 1963 and was planning to move to Paris...but I started thinking about either New York or Los Angeles after I had met the painter Ronnie Landfield who was from New York and through conversations about what was happening in the New York scene, I realized that Paris was over.  A teacher of mine said you pretty much had to teach to make any money in Los Angeles.  There were about five collectors in San Francisco and after they bought a piece that was it for sales.  It was a very different art world then, still very local.

What really got me here was I met a California artist I knew of only from his work when I was still in high school in Oakland named Carlos Villa.  Carlos was living in NYC at the time, but had come back to San Francisco for the spring and summer of 1966.  We got to be friends and he said to me:  Why are you in San Francisco? Come to New York and you can stay with me for two weeks and you will find a place.

Around this same time I met the sculptor Frosty Myers, who also told me to come to NYC and that he’d put me in a Park Place Gallery show.  At the time, in 1966, I was making my version of minimalism—very high finished boxes and pyramids using day-glo paints.  I’d played around with moving to Los Angles, but I felt New York was similar to San Francisco in its “look,” plus I thought I'd never get a job teaching in L.A.  I didn't know at the time that you were hired more on your “track record” that academics.  So I moved here packing my truck with my sculptures and paintings and found a place right away on Greene Street, where I’ve lived since September 1966.

When I first moved in, the building was being used for rag storage.  Aside from artists, these were the only other people moving into buildings in SoHo in 1966.  Only the Park Place Gallery was down here, then being run by Paula Cooper who later opened her own gallery on Prince.  At the time, pretty much everything downtown art-wise had to do with the Park Place Gallery. I think every artist showed there at one point.  Then a migration began of galleries from 57th Street.

It was a good time—lots of interesting shows and an excitement in the air about art, but we still went uptown for the big shows.  That started changing as dealers moved to West Broadway and the building at 420 West Broadway filled up with galleries like Andre Emmerich and Leo Castelli.  I was showing at Tibor de Nagy at the time, who was on 57th Street, but I also showed in group shows around SoHo in galleries such as the Max Hutchinson Sculpture Now Gallery and Joe Lo Guidcie had a cool scene on Broome and Wooster.

Charlie Cowles, who was the publisher of Artforum, moved in to that same 8,000 square-foot building on Broome showing his collection.  Charlie was my first collector, buying my first pieces that were colorful, many different shapes, almost the opposite of minimal, but by that time I'd met a lot of artists around my age that were moving very fast into something closer to what later became “Lyrical Abstraction”—artists such as Dan Christensen, Peter Young, Ronnie Landfield, Ken Showel, Bill Petitt and Ron Davis in California.

There wasn't much of a place to even buy food in SoHo back in those days, so you had to walk up to Bleecker and West Broadway for anything more than milk, but that was changing fast with artists opening shops and stores.  I guess I miss the individualism of those places.  You couldn’t see anything like it anywhere else. I’d say that it was a lot of fun to have all these galleries here in the mid 70s through mid 90s, and I do miss being able to see shows so easily.  My daily routine was to work all day then go out.

In the late 60s it's was Max’s Kansas City up on Park Ave and 17th, but later I’d go to Saint Adrian's on Broadway and Bond, up to Max’s, and then across the street to Max’s (Mickey Ruskin’s) new place, the “Broome Street Expressway,” where I had a big sculpture, along with Mark di Suvero, Frosty Myers, and David Novros.  If that wasn't happening, I'd go up to Steve Paul’s Scene on 46th Street, which would have live music, a sort of Jimi Hendricks after hours club.  Later as the SoHo scene started heating up around 1973, I'd hang out at the Spring Street Bar, run by Jon Leon and Brian Carey, and that was the best place in SoHo for food and drink.  Spring Street became the unofficial hang out for the artists showing in SoHo. It was a party every night there.

Around 1984, I began showing in SoHo using the 112 Greene Street space with Pat Hamilton as my dealer.  It was more or less a “pop up gallery” then, and we did the same thing in Los Angeles twice (in 1986 and 1990), and in Chicago alternating with New York every other year. It was also around this time I got married had two kids.  It was the best of times. I'd say those were the “Golden Years” of SoHo— everyone in the art world was down here showing work, but it all changed around the early 90s with the rents going too high and too many shops selling clothes too many tourists with no clue why SoHo was great, just wanting to shop.

That’s pretty much what SoHo is today—clueless tourists wandering around shopping.  What I miss the most is the galleries being in the neighborhood and the sense of community that came from going to openings of various artists I knew.  There were also the places like Jerry’s on Prince, which closed a few years ago, and just this year Café Café, which were great places to eat, very causal and reasonably priced.  Jerry’s was probably the only place outside of Raoul’s that you could still run into neighbors.  I don't think artists go to Raoul’s anymore.  I think we all meet on Facebook now or at an opening in Chelsea. I still like living in SoHo, but that’s got more to do with the fact that I've got a great studio that I've fixed up over the years, but I have to say, Los Angeles is looking more and more attractive these days...