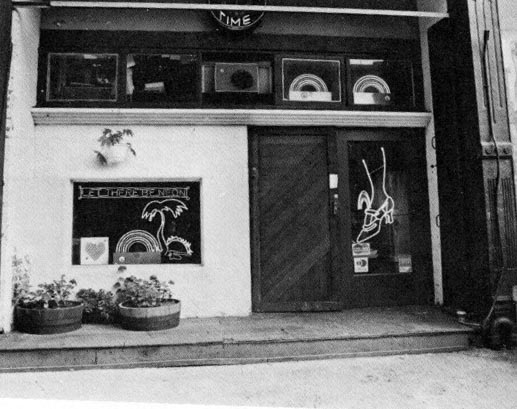 I started this blog with the intention of NOT focusing on SoHo’s gallery scene, as this topic has been covered elsewhere, but this post will be the exception.  Of all the galleries in SoHo, the two that drew my interest the most, as an eight year old, were Let There Be Neon and the Museum of Holography.  Granted, they were not really galleries in the Shafrazzi-Boone-Castelli sense.  But galleries they were, nonetheless.

Let There Be Neon, which is now on White Street in Tribeca, was on West Broadway near Prince where the Flats Fixed gallery once was.  Founded by Rudi Stern (who deserves a post of his own), the gallery was there for ages and ages, its cavernous interiors lit by glass tubes filled with glowing gas that twisted and turned to make multi-colored images and signs.  A brightly lit outline of a seated dog would sit under a vintage “parking” sign from an old lot.  The pieces made me want to look away for their garishness but also stare for their novelty.  I remember every time I walked out of the gallery into daylight I felt as if I were coming out of a dream into reality, like I needed a few minutes to wake up.

The Museum of Holography, on the other hand, was more like experiencing hyper-reality.  It was located at the end of Mercer Street (well, actually the beginning, if you go by street addresses) near Pearl Paint, and I’m not sure if I ever saw anyone go in there.  Holography is, according to a December 1976 New York Times article about the museum, “a form of picture-taking that uses no camera but harnesses laser beams to make images that are seen in three dimensions with startling clarity.”  You’d go in there and see something that at first looked two-dimensional, and then you’d get closer to see a three-dimensional ghostly woman standing in a box.  Weird.  A whole museum devoted to this stuff.  It seemed gimmicky and faddish to me, even as a child, but the museum held on until 1992, when it closed due to lack of funding.

Let There Be Neon and the Museum of Holography, along with The Earth Room, a room full of soil on Wooster Street that is still around, and Think Big, which was a boutique that sold way oversized everything.  These were the "galleries" I liked most as a child.  Something fun to look at, eye candy for the eight year old.  What would be their equivalents today?  I don't think there are any, unless you count the six packs at Hollister and the Botox at Cipriani.  Something to see, yes, but fun to look at?  Depends who you as, I guess.