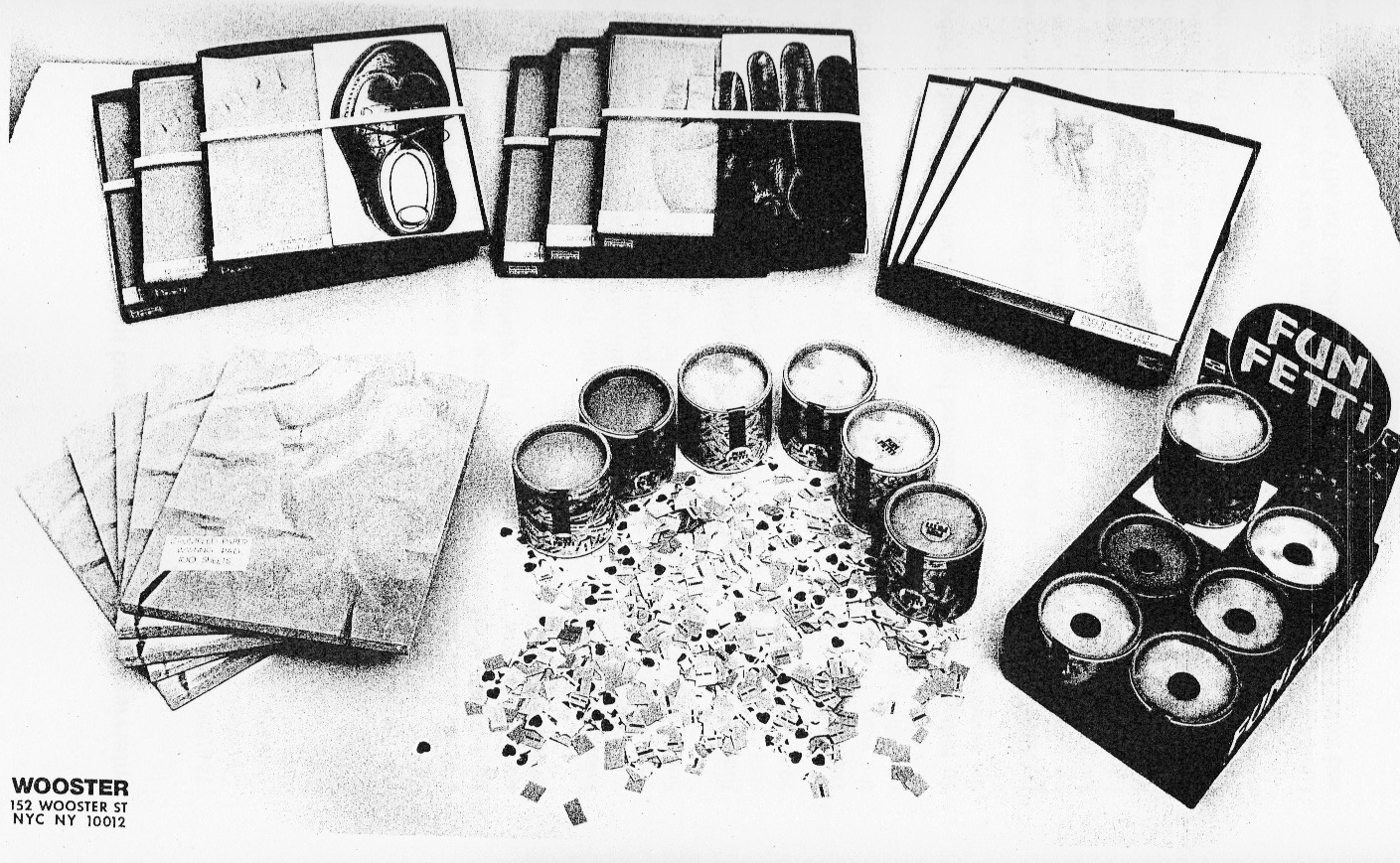 Warhol’s aesthetic was to take things from pop culture and put them in a high culture context, to take the Brillo box and put it in Leo Castelli Gallery. We were doing just the opposite. We were taking ideas from high art and putting it in Macy’s. — Jaime Davidovich

Churner and Churner presents the first exhibition of the complete works of Wooster Enterprises (1976-1978), the Fluxus-affiliated stationery design studio founded in Soho by artists Jaime Davidovich and Judith Henry. Using their own original designs and additional prototypes by George Maciunas, Davidovich and Henry sold small objets d’art—greeting cards, writing pads, confetti, and other paper goods—wholesale to Bloomingdales, Macy’s, and to novelty shops from Toronto to Tulsa. Wooster Enterprises was both a conceptual art project and a real corporation, and remains an overlooked antecedent to the MoMA Design Store, Takashi Murakami’s Kaikai Kiki, and other art/design hybrid ventures.

Though best known as a video artist, Davidovich had a background in commercial product design that informed his creative work. The goal of Wooster Enterprises was to circumvent the usual channels of museum and gallery distribution by producing artist-made items at low prices and selling them in regular retail stores. Fluxus founder George Maciunas was eager to endorse the project, and licensed the studio to reprint several styles of Fluxus stationery and masks that had been previously produced only in limited editions. The aesthetic indicators of conceptual art – simple black and white graphics with clean text – lent themselves naturally to reproduction and to grafting on to readymade media. Wooster’s product line made its debut at the 1977 Stationery Show at New York Coliseum. Blurring the line between artistic space and public space, the Wooster booth at the Stationery Show was one of many “intervention” pieces Davidovich staged throughout his career. It was not merely an attempt to democratize art by lowering the price point. Instead, the artists sought to take the means of production and distribution into their own hands. In the Soho environment of the 1970s, such an effort to bypass the traditional gatekeepers of culture was not unusual, but Davidovich was particularly successful in getting attention for his “brand.”

Virtually unknown today, Wooster Enterprises is primed for discovery as a pioneering project in self-conscious branding and an analogue-era predecessor to contemporary digital artists’ efforts to cut out the middleman by distributing their work online. This exhibition, which will include project documentation as well as the full product line, brings the experiment full-circle, calling attention to its art historical significance and its legacy in the contemporary art market. A publication with an introductory essay by Leah Churner, interviews with Jaime Davidovich and Judith Henry, and source material will accompany the exhibition.

Jaime Davidovich is a multidisciplinary artist whose work encompasses painting, photography, video art, television art, installation, and media activism. Best known as a pioneering advocate for artist-run, local cable television programming, Davidovich was a founding member of Cable SoHo (1976) and founder and president of the Artists’ Television Network (1978-1984). His own cable access show, an innovative weekly variety program called The Live! Show, aired on Manhattan Cable Television from 1979 until 1984.

Davidovich was born in Buenos Aires in 1936 and moved to New York in 1963. He was educated at the National College of Buenos Aires, the University of Uruguay, and the School of Visual Arts, New York. He moved to Soho in 1973 with Judith Henry; there, he began to explore ways of intervening in architectural and public spaces, and to employ video and cable television technology in his work.

Judith Henry is a multi-media artist who uses found materials and overheard statements in her work. She is the author of seven books, including Overheard in America (2006, Simon & Schuster) and Overheard on the Way to MoMA Queens (2002, The Museum of Modern Art, NY). She was born in Cleveland, Ohio, and received a BFA in painting at Carnegie-Mellon University. She founded Wooster Enterprises with Jaime Davidovich in 1976.