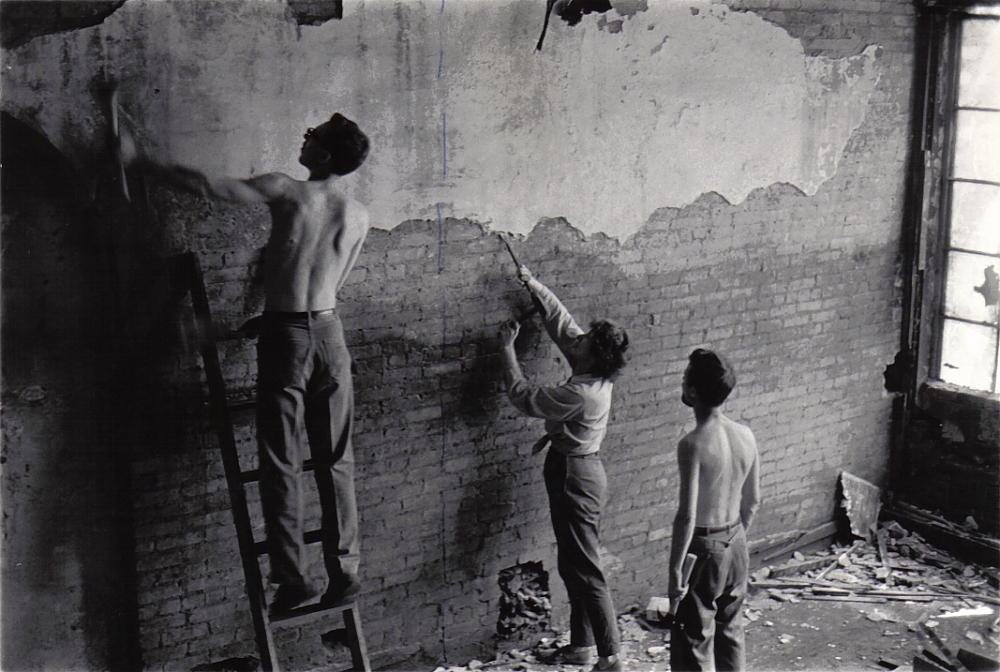 The artist Dorothy Koppelman, now 92 years old, has lived in SoHo since 1963.  She found this blog quite by accident when she was looking up something else, and how lucky we are that she did!  She got in touch and sent me her "Broome Street Story," an essay about how she came to SoHo and what she has been doing here over the past (gulp!) almost 50 years.  She also sent in a beautiful assemblage that she did for an exhibition at the Puffin Room that tells her story through text and images on paper.  There are very few people in SoHo today who can say they were here in the early-60's.  Dorothy is one of them, and here is her story.

I am going, at long last to begin the Broome Street Story.  We moved to 498 Broome Street in July of l963—I believe that it was the week of July 4th, in tremendous heat.

So, we—Hi and I and a few of our friends, including James Mellon—were scouting new neighborhoods. We were looking for a new place to paint and live because we were being evicted from the 26th street loft.  I had never been acquainted with anything, really, below Eighth Street, but we were looking. A real estate agent who will always live in my memory had an ad in the paper for a loft space on Broome Street. He had an address I think on Spring Street—this was our unwitting benefactor Louis Rubin.

We went to look at the loft. It was on the sixth or eighth floor at 497 Broome Street, an L shaped building, and we thought it would work out, but were hesitant.  And then we were looking out the window, when Louis Rubin said to us, you know I have a dandy building for you.  Come with me.

We went across the street, and Louis Rubin opened the boarded up entrance and we walked in. I will never forget it. There were no stairways or anything and from the top floor we looked up to an open skylight. The sun was pouring in. And I said this is it forever. We have found our place.

Hi and I were so happy, and we then, as I remember now, clambered up the makeshift flight of stairs to the first floor.  And we saw the possible layout of the whole building. We could not see what was happening on the ground floor, but later found out it was occupied by the friendly metal shelving company, B & Z. They stayed there until l977 I believe. But that didn’t bother us, and later we found out they paid about $100 rent for that floor and an unspeakably dark storage dark basement.

Climbing up the stairs we made our plan. The second floor for a printmaking workshop and studio for Hi.  We would live on the next floor with a studio for me wherever there was the best light. The fourth floor would be storage for  paintings as well as a space for the publishing company, Definition Press.

The fifth floor we didn’t get to yet, but later rented it to James Juthstrom, an artist whose work we knew. James did all the electric wiring in the building.  A young sculptor, I think it was Lee Lozano, put in the plumbing to replace the transparent, flexible pipes we had previously installed. Lee—I am sure it was she, judging from work of hers I have seen recently, put in the sinks and faucets, and all good pipes.

We slept between big boxes of books, kitchenware and paint supplies for quite a number of months, and we began scraping the walls of loose plaster to uncover the bricks.

I should tell about why the building was boarded up in the first place. There had been a fire and there were scorched planks, but the beams were, we were assured by dear Louie, OK.  We were so enamored of the building we didn’t care and we covered the floors with Masonite.

The first floor took the two-ton etching press in the back of the building with no difficulty.

On the second floor, Hi started setting up the workshop with James and Louis Freedenberg, I think. Later, several other printmakers from SVA worked there. Federico Castellon, Prince, Peter Passuntino, Michael DiCerbo (now at The Old Print Shop,) Allan Petrulis, Sally Brody, and others.  Hi’s carefully kept account book for the workshop has names I can hardly remember now, but there were many, and the workshop had a friendliness.  Hi had people only paying for the use of the beautiful press he had designed and built. I should add that we had a wood burning old fashioned stove on the that floor and our floor above and collected wood from the lumber yards no longer to be found in boutique SoHo.

On the third floor we tried to work out bedroom spaces, kitchen plans, studio spaces for everyone. I was trying to work where there was a north light, which there never really was, but before all this was settled, Hi and I had our bedroom in the front, and I did a big painting of him that has never been shown. I also painted Louis Rubin sitting right there in the front near the windows. He was proud to be painted, and he seemed almost to take on a certain dignity as a man, more than just a landlord.

Finally, the spaces got settled, and I set up a studio of my own, even though it was on the same floor as our living quarters. We had a Russian carpenter who built us a loft bed, using a ladder for steps in the rear of the space.

I only recently saw the careful drawing of the way the space was set up and used, as it was reported to the Building Department and the IRS. There were restrictions, but we circumvented almost every one. That, of course, is the story of how SoHo itself came to be.

The pivotal event for Broome Street as an avenue, a street with beautiful cast-iron buildings (we were not unfortunately one of those; we were only red brick), was the defeat of the Moses proposal and the Broome Street Expressway.

The reason we were installed in 498 was because Louis Rubin, the wily landlord, thought that he would be paid a handsome amount of money when the Broome Street Expressway was approved and the city had to claim his building under Eminent Domain. But that did not happen—happily for SoHo.

Hi was among those, with Jane Jacobs, who fought the powers that be (or were), and the Expressway was roundly defeated. We were offered $10,000 by Louis Rubin to move so he could collect more rent, but we weren’t moving.

Louis Rubin’s philosophy rang in our ears. The thing to do, he said, was let the artists in, they will fix up the place, put in their phonographs and speakers and clean up the space, paint the walls, and then raise the rents or throw them out if they don’t want to pay. I was fond of Louis Rubin because I learned so much from his forthright and awful philosophy.

To give a little additional background, Hi and I were students of Aesthetic Realism with its founder, Eli Siegel, and Carrie Wilson and I were the co-directors of the Terrain Gallery which presented Aesthetic Realism in its various aspects to the public.  This was just at the time Chaim and I joined the faculty of consultants at the Aesthetic Realism Foundation on Greene Street; we thus had the pleasure of walking to work from Broome Street to Greene and Houston.  When the Terrain had to move, and before it was possible to set things in order, we decided to have an interim gallery, Terrain Graphics, which occupied the front studio on the first floor of Broome Street.  Later, the ground floor, with its own entrance and large window, was beautifully redesigned to house the Eli Siegel Collection, which remained there until 1995.   After that, New York Artists Equity and the Broome Street Gallery occupied the street floor as well as the lower level until 2010.

This essay is an abridged version of a longer work entitled, “The Broome Street Story.”  For further information about Dorothy, Chaim (Hi), and their work: