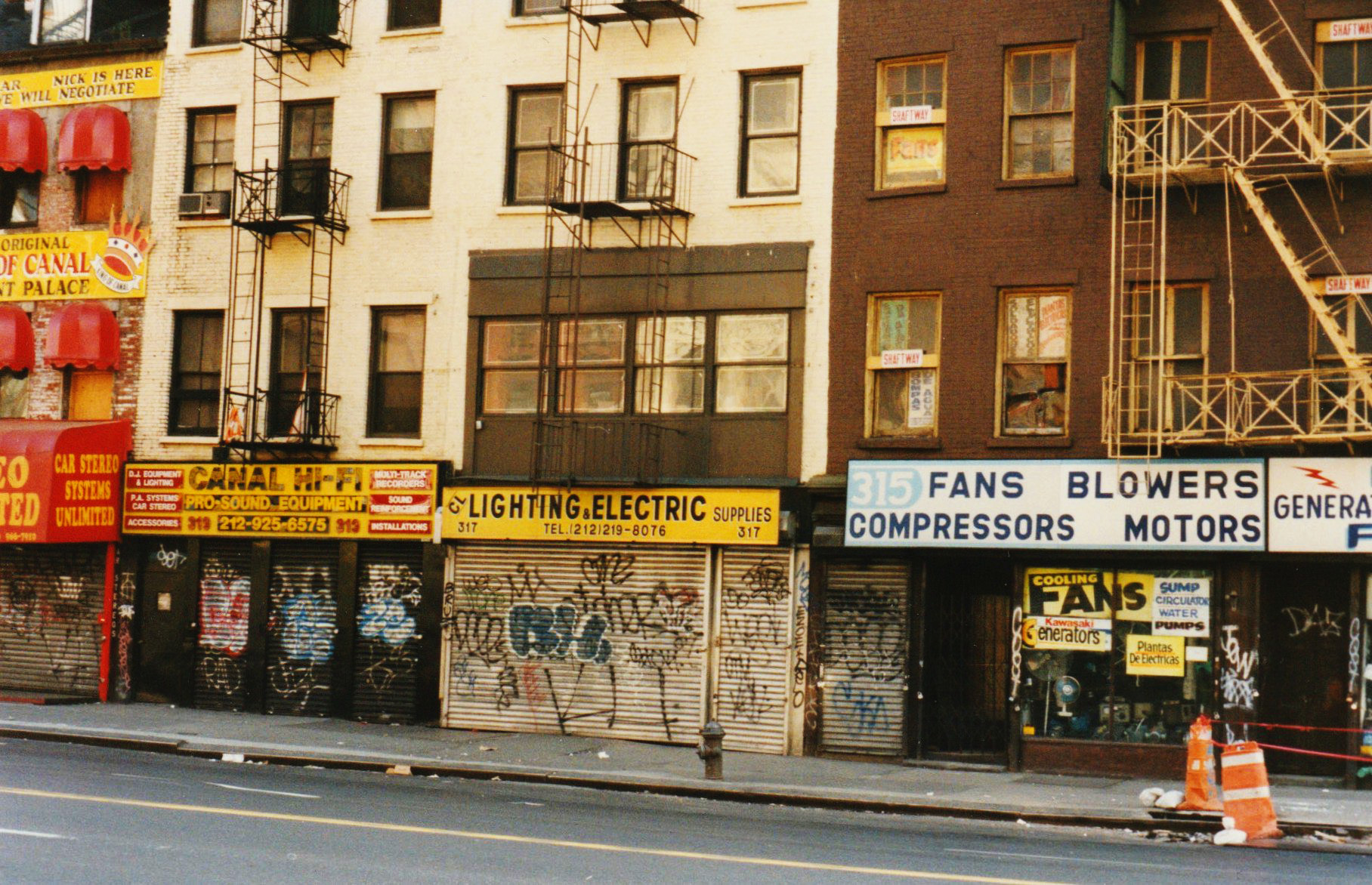 Today I would like to share a collection of photos I received recently. These photos and their captions by artist Susan Fortgang capture Canal Street in the 1980's and 1990's when it was a lawless flea market free for all. Her in-depth descriptions tell the story of a bygone era that straddled the old and new SoHos and shows us an up-close look at a street that had a culture all of its own, an invaluable addition to our image collection! Thank you to everyone who has submitted photos to the SoHo Memory Project Photo Archive thus far. For those of you who would still like to submit photos, it's never too late! Please send photos to yukie@sohomemory.org, or email me or share a Dropbox folder.

Images and text by Susan Fortgang

Canal Street, the North side (SoHo) between Mercer Street and Broadway

Here are many of the stores that artists, as well as others, loved and depended on: Industrial Plastics, CK&L Hardware, Canal Hardware, Reliable Hardware, and Tunnel Stationers (there were several wholesale “stationery” stores on Canal Street in the l970’s).  In the right-hand corner of the photo you can see the old Pearl River upstairs, on the corner of Broadway.  Most of these stores lost their leases, were subdivided, and became flea market type booths with no store front and only a metal gate to close.  Eventually, Canal Street

Lighting stores, electronic stores, and stores that installed car stereos were also prevalent on Canal Street back then.  The side streets (Greene, Wooster, Mercer) were plagued with vendors who were illegally installing car stereos, purchased on Canal Street, into cars parked along the curb. Loud music, garbage and congestion drove many of us crazy during the weekend.  I believe this was during the 1980’s.  There were also a lot of break-ins into parked cars along the streets, as criminals tried to get car radios and packages from people who were frequenting SoHo.  Car alarms went off day and night.

Canal Street - SoHo - North side between Mercer and Greene. This picture shows the buildings behind at a later date as some uprgrading is visible

Canal Street - SoHo - North side between Wooster and West Broadway . Businesses are closed in the early morning

In the 1980’s, every weekend, there was a large Flea Market on the parking lot at the corner of Greene and Canal Streets that rented to at least 50 vendors.  The organizer, who profited from doing this, lived on Greene Street.  In addition, there was also a large Flea Market on the parking lot on the corner of Grand and Mercer Streets which was a block long and went to Broadway.  Friday night, vendors flocked to the lower streets in SoHo to park their vehicles close to the parking lots so that they could easily unload their merchandise.  Some even slept in their vans, camping on the streets. This lasted for a few years and eventually the flea markets were closed for zoning infractions and, in the case of the Grand Street parking lot, there was development into a large modern building.

Canal Street - SoHo - North side between Mercer and Greene looking west toward the Post Office. Shopper along the street.

Canal Street - SoHo - North side between Greene and Wooster Street. Flea market activity with merchandise hanging on the metal gates of businesses that were closed on Sunday

At that time, the Greene Street Block Association was organized and kept the pressure on the city to close the flea marked on Greene Street which was occurring on a regular basis in violation of the certificate of occupancy which was for a parking lot.  However, these flea markets were the catalyst and beginning of the evolution of Canal Street into a flea market emporium and magnet for all sorts of vendors.

Canal Street - SoHo - North East Corner of Canal and West Broadway. I believe this photo was taken before the SoHo Grand Hotel was built (1980’s)

In the 1990’s more and more regular businesses on Canal Street lost their leases and spaces were subdivided into stalls selling all sorts of discount merchandise (watches, clocks, jewelry hats, t-shirts) as well as many illegal designer knock-offs of things like handbags and sunglasses.  Food vendors and itinerant vendors flocked to Canal Street. Tour buses dropped off tourists in front of the post office, many seeking to buy the fake designer handbags and other merchandise along the street.

Tunnel Machinery was another of the landmark hardware stores that populated Canal Street in the 1970’s and 80’s. Most stores along Canal Street were allowed to display merchandise outside of their store on their steps and loading docks which were technically a part of their property covering part of their basement space. The law required that any item displayed outside the store must be available for sale inside the store. You can see some Tunnel Machinery’s hand trucks and other items on top of the stairs. As Canal Street transformed itself into a Flea Market, many store owners, in violation of the law, rented out the space in front of their stores to flea market vendors. This was the beginning of the end of proper stores on Canal Street.

Canal Street - SoHo -North side between Wooster and West Broadway. Plastics businesses and Car Stereo Electronic businesses were found all along the street.

On the weekends, the sidewalks were so crowded both with merchandise and people that it was impossible to walk on the sidewalk.  Many times, people had to walk in the street to get to the subway.  Over- flowing garbage cans and garbage in general, abounded.

Canal Street - SoHo - Vendor selling fake Designer Bags. Because of a sophisticated system of signaling, vendors like these were able to dismantle their display within seconds to avoid the police who were looking to confiscate these bags.

Other types of criminal activity such as Three-Card-Monte games were prevalent on the street.  Later on, adult films were openly displayed for sale - offending many - particularly individuals who were walking with children. The illegal vendors had an elaborate system of shills along the streets that watched for the police.  When the police were detected, the message was relayed along the street and the vendors immediately took out black blankets and with clamps, and covered the illegal material.  The people selling illegal handbags in the stalls, chased the buyers out, and pulled down their metal gates until the police left.  Other vendors threw their blankets and merchandise into trash bags and quickly left the scene.

Canal Street - Vendors, displaying clothes hanging from awnings over the sidewalk, claiming the sidewalk space as part of the store.

Canal Street - SoHo - The corner of Greene and Canal looking east. The parking lot is to the left. They rented the spaces fronting Canal Street to various vendors. You can see the crowds, food vendors, traffic, and parking.

Canal Street - SoHo - The parking lot at the corner of Greene and Canal. The truck, parked next to the above vendor, becomes a store

Canal Street - SoHo - Canal near Greene Street. Vendors, enjoying the day on their aluminum chairs in the middle of the side walk.

Sometimes the police confiscated merchandise, but it didn’t make a dent. Car sirens, double parking, petty theft, robbery, and music were all part of the mix. Of course, there was plenty stuff going on that I wasn’t aware of... It was an uncontrollable and lawless situation. All of the residents living in the lower part of SoHo were affected by these conditions and it took many years until it changed.

Canal Street - SoHo - This photo, showing Adult Film material right on the sidewalk also captures other aspects of merchandise for sale on Canal Street - clocks, watches, stereos, and all sorts of electronics.

This is the last group of the Canal Street photos, primarily showing the open display of adult film material along the street.  Also some pictures of gambling on the street and in front of the Post Office.  It was not possible to photograph the actual gambling activity as someone may have broken my camera.

SoHo - North side - between Broadway and Mercer Street. Looking at this display, one can see why many people, mainly women, were offended. People w. children had to answer many questions…

Canal Street - SoHo - Corner of Mercer. Many people gambled directly on the street. Sometimes, there were fights over money and cheating.

Canal Street - The Post Office at Wooster Street. A further example of people gathering to watch the monte game and the betting. These activities contributed to the lawless atmosphere prevalent on Canal Street.

Susan Fortgang is an artist and a resident of SoHo since 1972.  She an her husband, artist Robert Schecter, live and work on Greene Street in their loft which is designated as Joint Living Working Quarters for Artists, part of the special SoHo zoning.  They have observed the evolution of SoHo during the past 46 years. Listen to Susan Forgang's SoHo Stories oral history here.