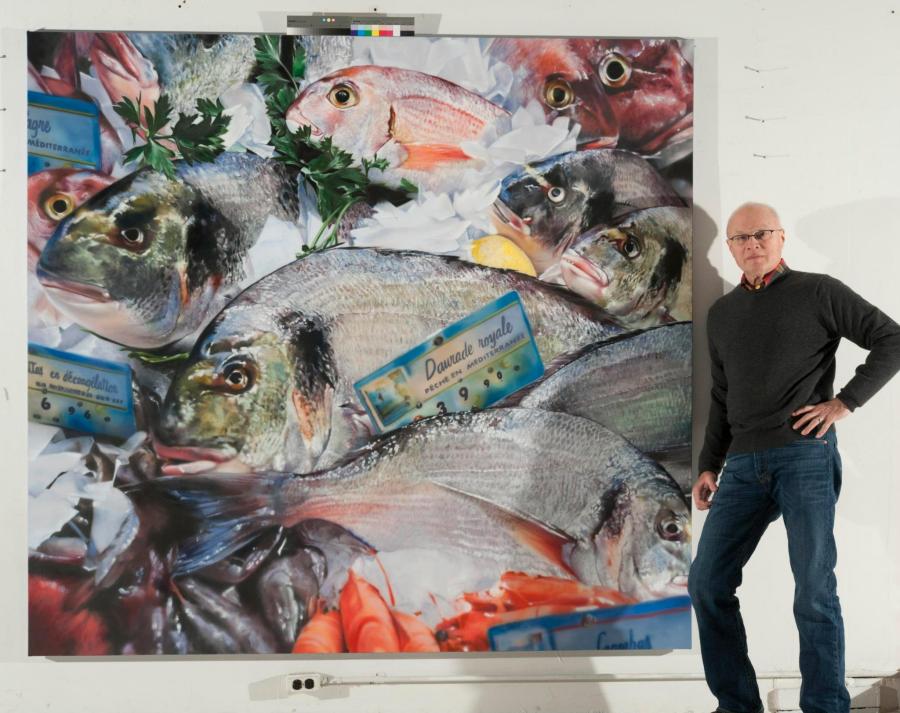 I recently had the privilege of visiting the home and studio of Ben Schonzeit. It turns out the we have been neighbors on Mercer Street going on 40 years and we had never met. Ben, a pioneer of the Photorealist movement, is well-known for his gripping, hyper-realistic depictions of subjects in vivid color. He is also a prolific collage artist and I also discovered, to my delight, that he is a fellow mail artist! His talents are many, but the purpose of my visit was to view his photograph collection, specifically his photos of old SoHo. We spent a nice couple of hours looking at his vast collection of images from the 1960’s and 1970’s. The following are a select few of the many fantastic SoHo scenes he captured, now long gone, but never forgotten. All captions by Ben Schonzeit. For more information about Ben Schonzeit and to view his wonderful paintings click here, and to view more of Ben's photographs, click here.

Robert Cottinham painting being carried across West Broadway most likely to Ivan Karp’s O. K. Harris Gallery. His gallery was on West Broadway between Houston St. and Prince at the time. (Photo from 1972 Horizon Magazine)

A.I.R. Gallery was a woman’s coop gallery first on Crosby Street as suggested by the reflection. (Horizon Magazine)

Ken Schol Mon Levenson and another artist at Fanelli’s. Beer and coffee for breakfast. (Horizon Magazine)

Eagle Diner , NW corner of Spring St; and Broadway. All glass. The building, probably late 30-40’s was painted by Richard Estes now gone. If the waitress knew your name and she knew many you were addressed by name, If not ‘Doll” was pleasant and worked for everyone else. Owner be two brothers who came in very early from the boroughs. Most of Broadway ‘s buildings had factories above the ground floor that opened at eight or earlier. (Schonzeit)

Jerry’s, the heart of SOHO where everyone met. The place! (Schonzeit)

Spring St and Wooster. Luncheonette on the corner that became Soho Robata now Crocs. On the south side of the street was Kast Cafeteria, an early hang out. Skylight in the back. (Schonzeit)

Millie and Joe in their Gallery Stop Restaurant. Customers helped section grapefruits for the fruit salad with their children sitting on their laps. Leo Castelli had coffee and a toasted bialy there every morning. (Schonzeit)

Jake, what we now call homeless, was given a place to sleep in the basement of 109 Spring by the owner of the building Danny Johnson. Danny, an artist bought the building and 107 Spring probably in 1970 with the help of Nelson Rockefeller. I don’t know the whole story. I move to 107 Mercer in 1972 using the back, side entrance. (Schonzeit)

Soho Robata postcard. A grill for yakitori on Wooster and Spring.