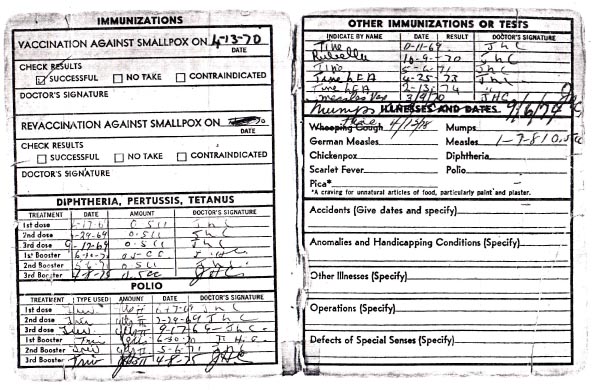 At Least You Have Your Health...

Suffice it to say that if many SoHo residents did not have enough funds to buy new furniture (see my story on dumpster diving), they probably could not afford health insurance either.  Luckily, we had the Judson Health Center.

Founded by Doctor Eleanor Campbell in 1921 to provide medical services to poor Italian immigrants who lived in the neighborhood, the Center was originally located in the basement of Judson Memorial Church.  In 1950, it moved to its current location at 34 Spring Street between Mulberry and Mott Streets (between Lombardi's and that creepy playground).  It provides very low-cost medical and dental care to people without health insurance and is affiliated with Gouverneur Hospital.  Judging by the fact that by the time I was going there in the 70's all signs were written in English, Spanish, and Chinese (that's where I learned the words "salida" and "damas") and none were in Italian, Judson's target demographic shifted with the neighborhood's needs.

I do not remember Judson being such an unpleasant place, really, especially considering it was a municipally funded clinic for the poor in 1970's almost-bankrupt New York City.  Don't get me wrong, it was decidedly drab and institutional, painted that awful shade of green that's supposed to be soothing.  But I think the staff did its best to brighten things up.  It DID take forever to get a physical, however, but I didn't really know any better since I had never been to a private medical practice.  You came in and waited on line to register at a window.  Then you sat down and waited to be called.  Once called, you went into a room where your blood and urine were taken.  Then you went into a larger room and waited again to be called.  Then you were weighed and measured.  Then back into the big room to wait to be called again.  Then you saw a doctor who poked and prodded and stuck a tongue depressor in your mouth.  And when you were finished, it was dinnertime.  It was kind of a cattle call, but everyone was very nice and the big room got lots of sunlight so it didn't feel too depressing.  All this for maybe $5.00.  By the time I went to college and had access to University Health Services, the fee had shot up to a whopping $7.00 .  But I should not joke.  We couldn't afford anything else, and they provided a sorely needed service to the community.  My mom even got all of her prenatal care there when she was pregnant with my sister (she didn't know about it when I was born) for the same $5.00 a visit.

Now I have insurance and I go to a fancy SoHo doctor and I'm still asked to wait, sometimes up to an hour, in a room until my name is called.  And the people there aren't always so friendly.  Better magazines, though.