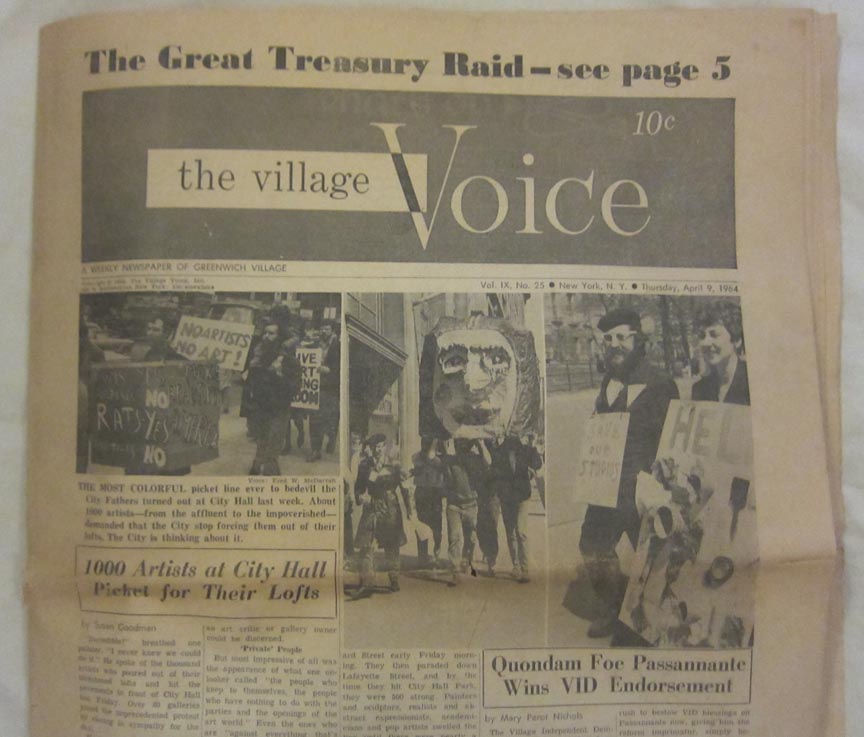 Are There Still Artists Living in SoHo?

SoHo is currently zoned as a manufacturing district that allows for light manufacturing, wholesale business and commercial use only, with the exception of certified artists, who are allowed to live in commercial buildings, if they can prove that they need the space to produce their work.

In 1969, the Department of City Planning conducted a survey that resulted in rezoning of the SoHo area, which was then zoned strictly for manufacturing use. In 1971, the Board of Estimates made it legal for certified artists to live in joint living and work quarters (JLWQ) in the newly-zoned SoHo area.

This zoning law that governs the use of buildings still stands today and requires every SoHo household to include at least one certified artist. But what, exactly, is an artist? According to the city, an artist will be granted certification if he or she demonstrates a serious, long-term commitment to an artistic medium and demonstrates a need for space to make art. Aesthetic considerations and the number of shows an artist has had (or not had) are supposedly not taken into account.

There is one exception to the artists-only rule. New buildings constructed on vacant lots are exempt and therefore anyone can legally live in these buildings. Otherwise, buyers who are not certified artists sometimes sign what is called a “SoHo Letter,” a waiver that acknowledges that they are aware that they do not have proper certification and they will not hold the building liable if the city finds that they are living in their homes illegally. As the JLWQ zoning law is rarely enforced, potential residents have little chance of eviction and therefore generally sign the waiver.

25 West Houston Street (whose most famous artist-resident is Kanye West) is exempt from JLWQ because it was built on a lot AFTER the law went into effect.

In 1987, the city granted amnesty to all SoHo residents, regardless of whether or not they were certified. Since then, many artists and non-artists have moved in and out of the neighborhood. Nobody knows how many artists, certified and non-certified, live and work in SoHo today, and it is probably impossible to find out. There have been several past attempts dating back to 1970 to get an accurate count, but any survey is immediately flawed by the fact that people living in SoHo illegally, whether it is because they are artists that have neglected to become certified or because the are not artists and therefore cannot apply for certification, would not respond in fear of being evicted.

In recent years, some have questioned whether JLWQ is relevant anymore. Even in the early days, there were non-artists who managed to get certified and legitimate artists who were rejected. As time went on, many non-artists found ways to obtain certification under false pretenses.

In 2012, The SoHo/NoHo Action Committee announced that it would raise funds to hire an independent team from Baruch College's Steven L. Newman Real Estate Institute to do a survey of SoHo. This team planned to confirm how many of the city-certified artists whose addresses were in SoHo were still living at their registered addresses. This committee advocates for the JLWQ zoning law to be revised to allow anyone, not just artists, to live in SoHo. They feel that the law is hindering their real estate valuation and that very few artists still live in SoHo, making the law obsolete. No survey by SoHo/NoHo Action Committee has been conducted to date, however.

Just recently, Councilwoman Margaret Chin proposed legislation to require owners of JLQW units to provide notice when a JLQW unit becomes vacant. It remains to be seen what will come of this proposal.

Artists' Lofts: 1960’s-1970’s — Many buildings in SoHo had been built as commercial lofts, which provided large, unobstructed spaces for manufacturing and other industrial uses. These spaces attracted artists who valued them for their large areas, large windows admitting natural light and low rents. Before loft living in SoHo was legalized, artists living in commercial buildings posted AIR (Artist in Residence) signs that indicated that someone was living in the building and on what floor in case of a fire or other emergency

Through my own personal experiences since beginning this project in 2011, I have met many many artists who still live in SoHo, many more that I thought existed. These artists live in the shadows of the bright and shiny boutiques and designer lofts, obscured but present. They tend to live quietly in their old-school lofts that have not changed since they moved in 45 years ago and watched their maintenance costs skyrocket due to the pricey demands of their new neighbors. Marble lobbies, roof decks, and other amenities are paid for by all coop members, even those who do not wish for such "improvements" and cannot afford them.

Regardless of exactly how many artists live in SoHo today, many SoHo old timers are in favor of keeping JLWQ zoning in place as a means of slowing down real estate development, although not all. I have heard that some people have trouble getting financing to purchase a loft due to zoning restrictions and some hoping to sell their lofts have to do so at a lower price because some buyers with deep pockets are scared off by it.

For many long-time SoHo residents, most of whom are artists and some of whom are non-artists grandfathered by the 1987 amnesty, however, the law is seen as a safeguard against being pushed out by escalating costs. At one time, they were the ones who were living in SoHo illegally, when nobody else wanted to live there. Now, they are the only ones who are legal residents. They see this protection as a birthright of sorts, dating back to the days when they were giving birth to a nascent SoHo.