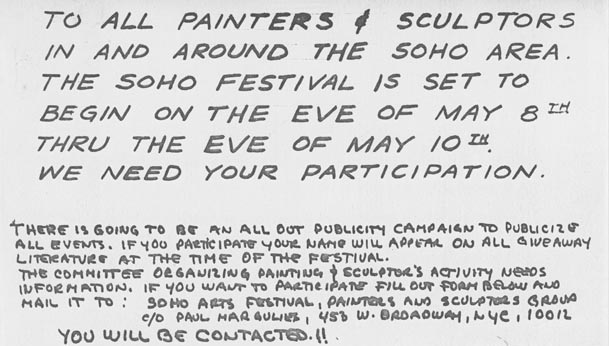 A "Keep SoHo Low" t-shirt from the SoHo Alliance

And am I any wiser? Yes, in fact I think I am. I have gathered quite a bit of wisdom after writing this blog for four years. I've done oodles of research along the way, as well as much reading, writing, lecturing, and chatting with old timers, and in the process I found that I now belong to a coterie of like-minded historians and memory keepers who realize the importance of preserving the past to inform the future---all you guys. So what’s ahead for year five of The SoHo Memory Project? In 2015, I put my money where my mouth is (though there will actually be no currency exchanged) and go beyond the parameters of this blog to create the SoHo Memory Archive that I’ve been writing about this past year (see my post Archivism as Activism).

In 2014, I reached out to my coterie with amazing results. Those who were there at the ground zero of SoHo, who wisely saved their files, reports, jottings, clippings, photos, and even t-shirts knowing somehow that these were the records of a significant moment in time that was much larger than themselves yet in which they played an integral part, have entrusted me to assemble these parts into a coherent whole.

The SoHo Memory Archive is a collection of materials relating to development and preservation in SoHo from the 1960s through the 1980s and the present.  I will spend the next year cataloging this collection of “evidence,” and I hope, by the following year, the collection will be usable to anyone who wants to learn from our collective past. Throughout this process, I will share items of significance that I come across.

I have barely just begun sifting through this treasure trove. These are only a few of what looks like thousands of items that are awaiting processing and archiving (click on links to view documents):

A 1972 letter from Ivan Karp to August Heckscher, Administrator of the Department of Parks, Recreation and Cultural Affairs regarding the possible renaming of the portion of West Broadway that runs through SoHo. (Read my post "Meet Me on the Corner of Pollock and De Kooning" about renaming West Broadway "Jackson Pollock Way")

A 1971 agenda for the Greenwich Village Charrette on June 4-6, 1971 to discuss the formation of an alternative public school on Hudson Street that became P.S.3. (Read my post "The Teachers Were Nice, They Checked Us For Lice (But Mostly They Gave Us Very Good Advice)"about P.S.3.

So, if this is the kind of intrigue that floats your boat, stay tuned for more adventures in archiving!!!!