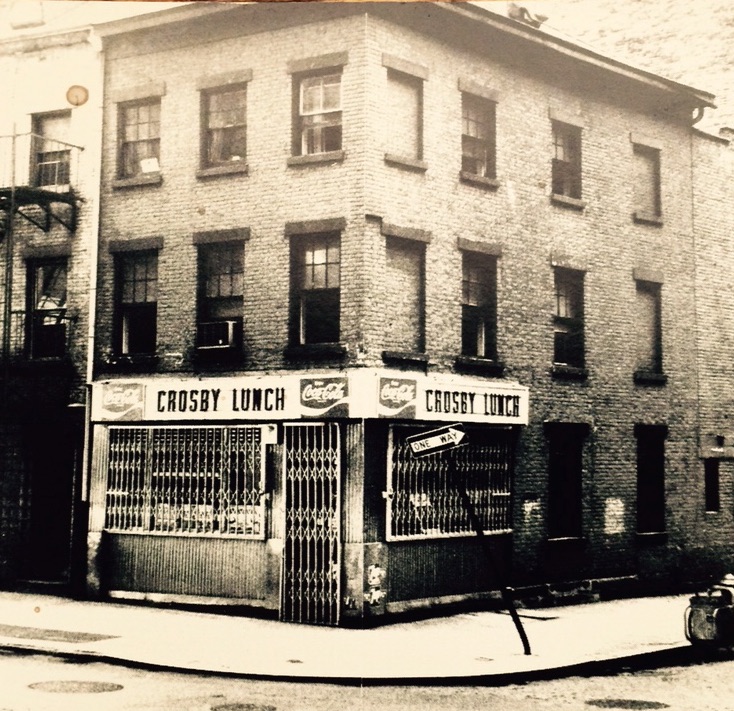 And The Survey Says,... Part II

Crosby Lunch, the coffee shop on the corner of Crosby and Prince, where my mom would get me grilled cheese and milkshakes, is one of the places I miss most from my childhood

A couple of years back, I did a roundup of responses to my SoHo Memory Survey that ended up being one of my most popular posts (see And the survey says, ....).

Today, I am revisiting the survey, as many people have submitted profiles since 2013 (If you have not yet submitted a profile, please go to the "Share Your SoHo Stories" page and fill out the form). Reading through the responses, I felt myself transported to another time, when things were most certainly quieter, dirtier, colder, friendlier, and more surprising.

Not that there aren't surprises in the SoHo of today. The ever escalating number of shops that open in SoHo is surprising to me. I thought it would have plateaued years ago. The ever escalating property values in SoHo. I thought that, too, would have leveled off at some point (it has to at some point, doesn't it?). The fact that Jon Bon Jovi's loft in the New Museum Building sold for $37.5 million. But I'm not sure that was even surprising, just a stark contrast to the fact that people I know bought their lofts for $5,000, but that was in a different time, though in the same place.

I suppose that's the takeaway of this post. That we have fond memories, good and bad, of old SoHo, but that is not to say that we are not fond of our present, though perhaps in other ways. The very fact that there are high-end stores and high property values is what has allowed me and my family to continue living in SoHo, through income from commercial tenants and the security of owning property in this highly desirable neighborhood. It's just that our present is so very different in ways we could not have possibly imagined, back when SoHo was young.

The corner of Greene and Prince Streets, ca. 1978, back when the Richard Haas mural was new. Photo: MCNY

Everything. It was the real New York. I remember a store called Barone, that was a fabulous make up store. I loved "Let their be Neon" that was great. The lights in some of the steps and the sidewalks. I miss Food, the restaurant. I miss the street cats. I miss the smell of the bakery on Prince Street.

The vibrant arts community. The building of our lofts to make them livable. The help neighbors gave each other in trading construction skills. Building the lofts together. Seeing each other's art and encouraging each other. Sharing ideas and materials. Knowing everyone when you walked down the street or went to the store for groceries. Having my named called out when I entered Spring Street Bar or Magoo's or Fanelli's,

The other artists, the ability to interact and learn from one another, building a community of fellow artists, using our studios to show each other's work, the peace and quiet to make art and think creatively. I miss the all night diners. I miss gathering at Fanelli's when Mike was still alive and his sons worked there. I miss the manufacturing community that worked here, though many in sweatshops. Yet it made the neighborhood real.

It was a discovery everyday. Artists. Buildings etc. Today it is too "precious" for my taste but NYC never stays the same and I love that too.

The uniqueness, the awesome shops unlike anything else, the grottiness, that flea market in the empty lot, the shop where they sold only postcards.

The mix of cultures, of working class and middle class, families, and single folks, old and young, and artists, and real life. The streets at night, barren but full of promise and fun. So many characters.

Walking around the neighborhood and running into friends and acquaintances. The community of artists. The quieter streets and fewer stores. The entire neighborhood.

I still love the old buildings, the urban landscape. I'm sad it's so commercialized. I loved the remoteness, the outlaw feeling. I remember going home from the bar at night, walking down the empty center of the street instead of the sidewalk, because it was safer.

The feeling that I wasn't in Kansas anymore.

I left in the 60s but I do not miss the 5 long flights of stairs or heating the loft with a space heater and a fireplace so it was cold as hell in the morning or not being able to answer the door incase it was the building inspectors.

The danger to women walking dark streets at night coming from waitress and bar tending jobs. We were not supposed to be living here so we could not complain about the street lights being out. We could not call the cops for the same reason.

Living here illegally, having no garbage pickup, no street lights at night. I do not romanticize the sweatshops that misused migrant or illegal workers. But I miss the integrity of people working for a living to make a better world for their families.

The grime, the industrial noise during the day could get irritating.

The chicken slaughter house across the street from my apartment building on Mulberry Street. It smelled horrible in the summer heat.

The sometimes dark and deserted streets. The loud trucks on our block during day and night.

I miss all of it. The dirt, noise, factories, lofts that my friends lived in ...

The mafia as my landlord for a work space on the second floor of 69 Mercer St. You had to be very careful not to piss them off.

The hike to grand union; unlocking my door with one foot jammed to keep the elevator door from closing on me, while a packed crowd of sweat shop workers waited behind me in the elevator and I occasionally fumbled my keys and dropped them down the elevator shaft; rats in the tub.

I can't think of any deterrent, other than it was hard to catch a cab.

I miss it all!

The long and happy friendship I had with Sol Lewitt who lived on the 2nd floor of our building. Also the huge fire across the street where 4 firemen died and Sol saved me from being burned up.

So many. Seeing the colorful textiles outside, the large spools that people used as coffee tables. Dean & Deluca, galleries, Whole Foods, Food.

Meeting talented people from all over the world and from places in the United States that I had never heard of. They came, every year, the best and the brightest from rural, agricultural and cosmopolitan places and they all ended up here trying to build old lofts into studios and to make themselves famous. Andy Warhol walked and hung out among us, Henry Miller too, Blondie sang at Arturo's, Phillip Glass bought my piano when I needed rent money.

The buildings, the architecture that is so compelling both inside and out. It was a soulful place filled with artists of diverse backgrounds, drawn here from every part of the US and abroad to try and make art of every kind; jazz, poetry, sculpture, dance, painting, and photography etc. The energy was amazing and unique because we were here in one area while the rest of the city for the most part ignored us.

Having to yell up to someone's loft for them to let you in. Also, the window ladies on Thompson - leaning out of their windows across the street, a pack of smokes, a bottle of coke, and a rolled up towel to rest their arms on.

Many vivid memories, but I think the interior of the raw and semi-finished lofts were intense.

There are a few: During my first summer there, 1977, there was the big Blackout in the Northeast. I remember sitting on my fire escape around three in the morning and seeing more stars than I'd ever seen in NYC. Mike Fanelli, asking the local tradesmen/artists, "are you working", and not charging folks if they were out of work. Then, there was the guy who, around 10 or 11 at night, every so often, would come riding across Prince Street on a bicycle, from the Bowery, towards Soho, singing opera at the top of his lungs, with his dog running along side of him. I could hear him from blocks away, before he appeared outside my window. If I was in bed, I'd get up to run to the front room window, to see him. It made me feel joyful to hear and see him. The days surrounding the tragic disappearance of Etan Patz. I used to see him, playing on the sidewalk out in front of his parents loft, near Whole Foods.

Standing in front of our graffiti filled front door taking a first day of school picture every year from age 5-10.

Impossible to narrow down... Fear when Etan Patz was first reported missing... Getting Easter Basket from guy at Broome St. gas station when I was 3 (we were Jewish so this was confusing to me)... Eating at Food... A lifetime of happenings and events.

My landlady, Mrs. Ermelino, leaning out of her window on a little pillow, yelling at people who wouldn't clean up after their dogs: "Hey! You! Why don't you go back to Jersey!"

Playing in the parking lot on Grand Street, waiting for the school bus at 6th Ave. and Grand and getting hot choice from the diner there on cold days, riding bikes on the old West Side Highway. Walking home after midnight in a snowfall.

Walking past a store window on West Broadway and seeing a pair of exquisite shoes I couldn't afford (I think there was one boutique there then). Meeting Isamu Noguchi on my roommate's couch, in her loft (he was her friend).

Seeing an entire world emerge from a dank and dark forgotten part of NYC.