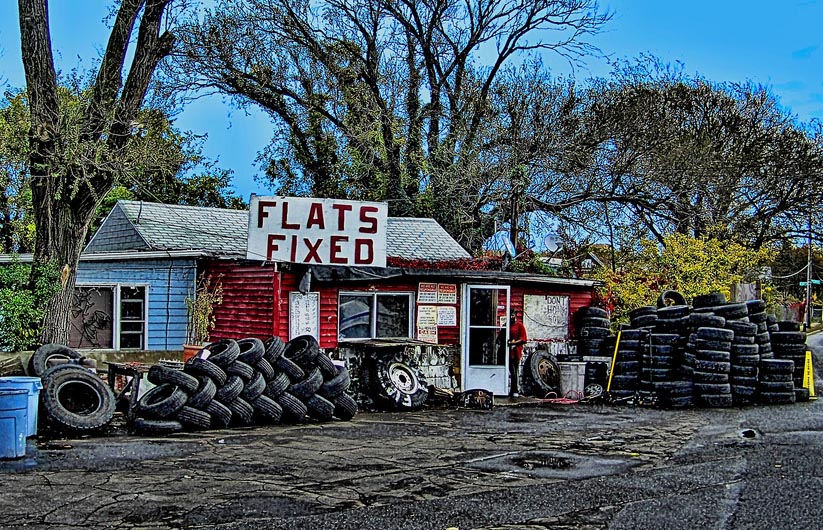 (Almost) In the Right Place at the Right Time: FlatsFixed Gallery

FlatsFixed Gallery no longer exists, and, alas, nor do any photos of it.

FlatsFixed Gallery, named for signs posted in garage windows on the Lower East Side to convey its anti-art establishment focus, was the third gallery to open in SoHo after Reese Palley and Paula Cooper.  This was in 1970.  Soon thereafter, many galleries, among them O.K. Harris and Leo Castelli, opened on the same street.  FlatsFixed was located at 451 West Broadway, which some of you may remember also as the home of Let There Be Neon, with its cavernous whipped-cream-castle interiors.  The space was indeed different, some would say odd.  Like a gallery space on acid.  A perfect venue to show neon art.  But not so perfect for other media, apparently.

Mark Gabor left a successful career as a Managing Editor of Abrams Artbooks at the ripe old age of 26 to open the gallery with partners Paul Margoles, a craftsman who originally designed the Gaudi-esque space to showcase his furniture designs, and Arthur Levin, Mark’s best friend from Reed College.  Arthur was the financial backer, the business side of the business, Paul was the artistic side who basically came with the space, and Mark was the core driving force holding the other two in orbit.

At Abrams, Mark had worked with many mainstream artists, including Robert Rauschenberg, Larry Rivers and Robert Indiana, and when he left on not the best of terms with Harry Abrams, he wanted to make a break from what was already beginning to be seen as the art establishment and represent unknown artists.  A noble cause, a daring one at a time when SoHo was not yet in the throes of being the art capital of the world.  So, with much hope and enthusiasm, FlatsFixed mounted shows of graphics, prints, and multiples (three-dimensional pieces, sometimes electric, that were made in small editions). As an added attraction, FlatsFixed periodically held events -- plays, happenings, performance art --  in what Mark himself calls "that goofy space.”

For two years, Flatsfixed struggled to stay afloat, with Levin kicking in funds to cover overhead.  But they could not get itgoing.  They were not taken seriously by the press, and even when they were, their space was not taken seriously.  Reviews were scant, as were customers.  If potential customers did come in, they were often more interested in the space itself than the art.  Or they were looking for artwork to match the color scheme in their living rooms.  And on top of that, the artists themselves became angry at the gallery for not being able to sell their work, after Mark had chosen them precisely because they were talented but had not yet had much exposure.

In 1972, completely disillusioned by an art world based on “wheeling, dealing, and stealing,” and not willing to compromise his vision by selling artwork to clients looking for something merely decorative, FlatsFixed closed its doors just before the gallery scene in SoHo exploded.  At the time, Mark felt that SoHo was being so exploited that "it had no future.”  To this day, he says that this lapse in judgement has become his favorite professional embarrassment. He thought he was outsmarting everyone by getting out early because he was sure the SoHo art scene was going to be a “quick fad.”

So why am I telling you this story?  The story of a failed gallery in a time and place when many galleries not only succeeded but were successful beyond anyone’s wildest dreams.  Because I’d like to think of it as a large failure that contains within it a small success, and therefore a bittersweet if not happy ending.  Mark wanted to do something.  He wanted to represent unknown artists.  That didn’t work out.  But instead of changing what he wanted to suit his bottom line, he moved on.  Was this arrogance, stupidity, or authenticity?  Perhaps a bit of each.  Nonetheless, he stuck to his guns, at least that's the way he tells it in hindsight.  To be young and idealistic is to be naïve.  To be old and jaded is to be practical.  When it got down to it, Mark said, “The gallery business was no fun."  Naivete won out over practicality this time.  And perhaps if this had happened more often, the gallery business would be more fun.  But fun doesn't make the world go 'round.