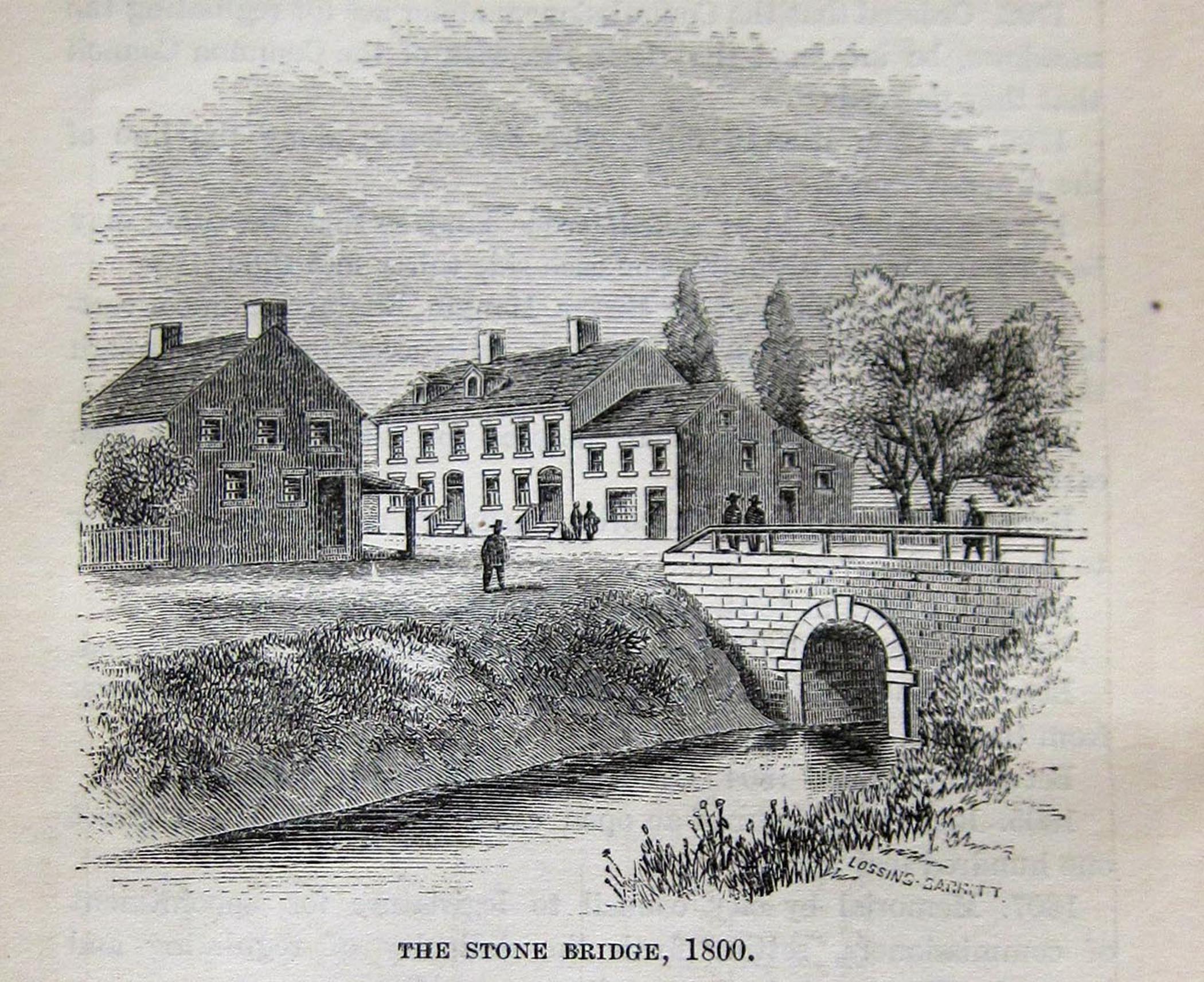 All in a Day's Work

The Stone Bridge, from The Manual of the Corporation of the City of New York (1865)

One of the many perks of my "day job" at New York Bound Books is that I get to pore through lots of rare books about New York, for research and just for fun.  I recently photographed a few for our catalog that included several image of old SoHo, and when I say old, I do not mean when Dean and Deluca on Prince Street old, I mean when Canal Street was a canal old.

Title Page of the Valentine Manual 1865

The first image, of the Stone Bridge (see above) in 1800, is from the 1865 edition of the Valentine Manuals.  Officially titled The Manual of the Corporation of the City of New York, this series of books was commonly called the “Valentine’s Manuals” for David T. Valentine, the clerk of the Common Council who compiled the volumes that included the city’s annual reports and directories. (read more about Valentine Manuals here at New York Bound Books).

A little research produced an article entitled "The Old Stone Bridge at Canal-street and Broadway" by Capt. Walker Bicker in The New York Times about his memories of  the bridge and its environs in the early 19th century, published April 9, 1886:

Broadway was not paved beyond "the stone bridge" which stood where Canal-street now crosses Broadway.  This was a famous resort for us schoolboys.  It was considered "out of town"—all north beyond as well as the immediate vicinity was country, post and rail fences dividing the land into different sized parcels.  This bridge spanned a small stream which conveyed water from the Collect on the east side of Broadway (where now stands the Tombs) to the west side, where was an extensive meadow covering most of the ground from Broadway to the north River and from Lispenard-street to Spring-street.

Here's another image of Broadway, just one block to the north, in 1824.

Corner of Broadway and Grand Street, 1824 from The Manual of the Corporation of the City of New York (1865)

This brochure contains a lot for sale at "513-519 Broadway through to 84 to 94 Mercer Street," a plot that contains three buildings on Broadway, two of which go all the way through to Mercer Street, that would bring in an estimated whopping $80,700.00 in rent when fully occupied, presumably annually.  I found a recent article on Curbed about a unit in this lot for rent today:

Hank Azaria, best known for doing his voices on "The Simpsons" (Moe, Apu, Chief Wiggum among others), told the Wall Street Journal that he's renting out his loft at 84 Mercer Street for a cool $16,000 per month. For that moolah you get a 4,000 square foot loft with 3 bedrooms. He picked the place up from photographer and director Cindy Sherman for $4.25M back in 2005, but he plans to spend a lot more time on the West Coast.

If a renter will pay $16K per month for a loft, imagine how much one of those retail spaces fetches!  I pride myself on being pretty good at math, but I'm not even going to attempt to figure out the percentage of appreciation between 1929 and 2011.  (And I don't know if Azaria is BEST known for his Simpsons voices, fantastic though they are.)

Last, but not at all least, here is a newspaper clipping from February 9, 1907 of a picture of The Hall of Science, "where the freethinkers foregathered seventy-five years ago."

This building on Broome Street (probably between Mott and Elizabeth)  was purchased for $7,000 by educational reformer Frances Wright in 1829. According to the Encyclopedia.com entry on Wright:

Commencing a career as a lecturer, she bought a Baptist church and renamed it the Hall of Science, housing a lecture hall, a secular Sunday school, and a bookstore for free-thinkers. Wright’s lectures challenged evolving concepts of domestic ideology when she explained the experience and ideals of Nashoba, criticized evangelical revivals, and advocated education and equal rights for women. Her favorite topic was educational reform. She proposed a “guardianship system” through which state government would establish district boarding schools, where Americans could be raised for social equality through a curriculum that instructed all children in free inquiry and the physical sciences. Wright found admirers in New York among the reformers and artisans who comprised the city’s Workingmen’s Party and who also advocated enlightened public education and such issues as the ten-hour workday, abolition of imprisonment for debt, and attacks on the privileges of banks and capitalists.