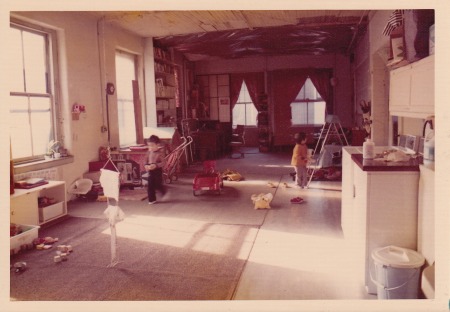 LOFT LIVING This is the front half of our "glamorous" $125/month floor-through loft on Crosby Street with sooty windows on four sides, plastic stapled to the ceiling where it was falling down, furniture mostly found in dumpsters, and, of course, no C of O. But oh so much space!"

When people I meet learn that I grew up in a SoHo loft, they always say that it must have been so fun and glamorous.  I guess it was fun riding my bike or swinging on the porch swing in our "living room," but it was also really UNCOMFORTABLE and not really glamorous at all.  But it was also all I knew.  How could I know that other children grew up with central heating and soundproofed walls?

At the VERY beginning (and I don't actually remember this, my mom told me about it), we had a coal burning stove for heat.  A truck would come and dump a pile of coal in front of our building and my mom and dad would shovel it into a barrel and bring it upstairs where we'd burn it and get sooty windows.  But here's the best part—we didn't clean the windows because we were living there illegally and my parents didn't want anyone knowing that we were there.

After my parents got sick of schlepping coal, we got one of those gas blowers, but the heat in our loft was still erratic at best.  When it was really cold outside, I sometimes had to sleep in my winter coat even though every year we taped plastic over all the windows, including the fire escape, to keep out the drafts—not the safest thing to do but better than frostbite in your sleep, I guess.  And the windows were so flimsy that they let in all sorts of noises from the street.  No wonder I suffered from insomnia as a kid.

As the years went by, our home started taking shape.  Luckily, my father was a carpenter (as well as a painter), so whenever we could afford to add a room or upgrade our fixtures, he just did it.  No permits or permission from the landlord.  But, partly because we only had a couple of radiators in the front of the loft to heat the entire space (by then we had moved to a loft with steam heat), the walls of our rooms (except for the bathroom) did not go all the way up to the ceiling.  Eight foot walls with a twelve foot ceiling do not provide much privacy, nor do they protect you from the television blaring in the other room while you are trying to read.

But this all took about forty years to accomplish.  Our home, like those of all the SoHo old-timers who managed to stay in their homes, was and still is a work in progress. As I mentioned earlier, for people my age, it was all we knew.  Loft living was the norm.  And it really was fun having all that space.  But what about all of you who out there moved here from other, more comfortable, places?  What was it like raising a family and making a home in a place at once so unglamorous and inhospitable and also so much fun?