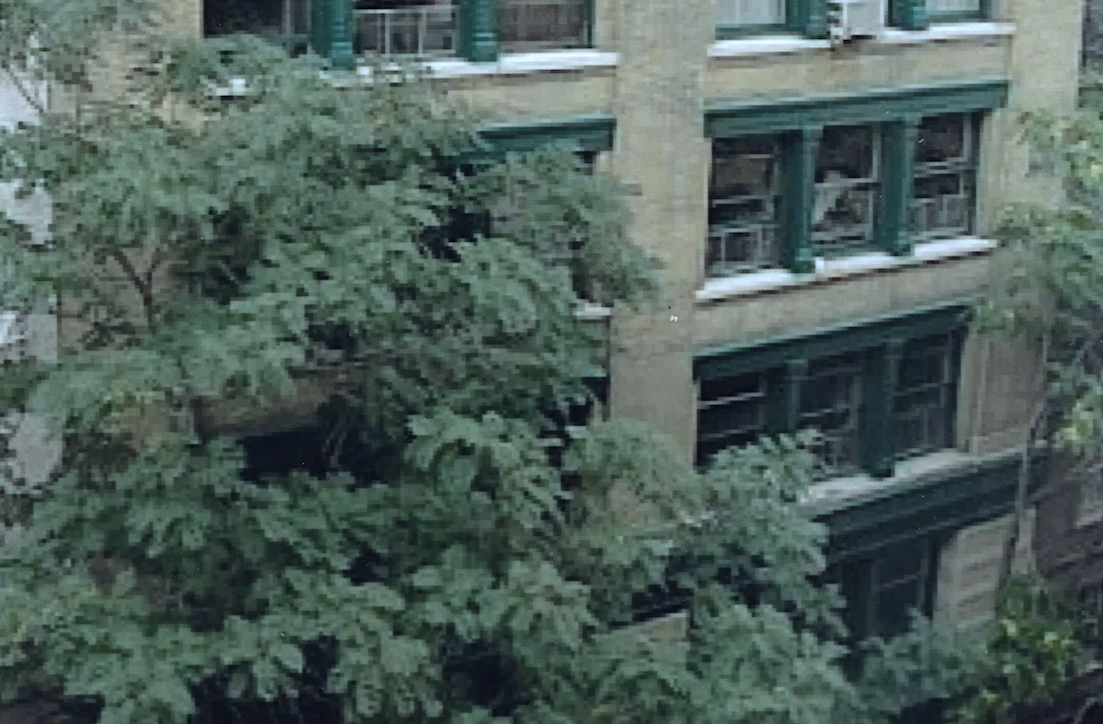 This past week, we had the trees in the back yard of our building taken down.  They were sick and old and we intervened too late to save them.  They had become a serious liability, growing higher than our four story building, their soaring limbs just waiting to be blown away in the next big storm.  A neighbor reflects on our loss:

I know she had to come down but I was crazy about that tree. Ghetto palms in general and "ours" in particular. Such a wondrous species. I remember examining the roots when I was little and being amazed to discover that it was growing out of about an inch of silt on top of concrete. And over four decades grew to be four stories tall! Beautiful, where and how they take root.

It was thus an eerie surprise when Roz Bernstein, co-author of Illegal Living: 80 Wooster Street and the Evolution of SoHo and resident of Wooster Street, sent me the following guest post about the beloved trees on Wooster Street being taken down.

The facade of 80 Wooster Street before the tree was removed

Recently, the New York City Department of Parks sent six men and three trucks with two chain saws to cut down George Maciunas’s trees. The noise was deafening as one of the men, in a cherry picker, wielded his saw while the other below was piling the fallen limbs. The founder of the Fluxus Art movement, the founding father of SoHo, and the man whose office was in the basement of 80 Wooster Street, Maciunas would never have let it happen. Not if he were alive! Liberated some 45 years ago, when Maciunas uprooted two trees from a parking lot near Canal Street, they were planted in front of 80 Wooster to conceal the ingenious electrical work done by Maciunas’s workers to provide free electric service to Jonas Mekas’s ground-floor, avant-garde theater, the New York Film-makers’Cinematheque. According to a tale told by Mekas, the morning after the trees were planted, two female police officers came to Mekas and told him to remove the purloined trees. Mekas woke Maciunas who was still asleep in his basement space only to be told that Mekas should tell the officers that, if they wanted to, they could remove the trees themselves. Armed with his Bolex movie camera, Mekas conveyed the message. After a moment or two the officers left, never to return.

The tree in the process of being removed

In May 2007, plaques started appearing on cultural sites primarily in downtown Manhattan. The plaques were installed by Creative Time who asked various artists to select 32 places to commemorate historical art projects for an event called One Day It Will Please Us To Remember Even This. A 33rd plaque was selected by input from the public. This plaque was affixed to the larger of the two trees in front of 80 Wooster Street. The plaque noted that Fluxhouse Coop II was started by George Maciunas who planted the tree. Three years later, the trees, now well over 50 feet tall, began losing considerable branches in strong winds. “The trees were at the end of their useful life,” said building resident William Downey, who added that they were an invasive specimen (probably Ailanthus) that usually lived about 40 years. “We hired a private tree company to do a little trimming and, after they did their work, we asked them if they could prune it more.” Their answer was a bit surprising: The City owns these trees they said, insisting that the City owned all trees on the sidewalks. They added that to do anything to them owners had to, at the very least, get a permit. Further investigation by building residents proved that the City did indeed own George’s trees. A short time later, the City ruled that the trees were indeed a danger and that they should be cut down. For residents of 80 Wooster, meanwhile, the situation became more complicated. No longer only about liability, they were facing the reality of having to install a new standpipe system in their building which meant finding a place for a new water pump. “The only basement space that was available was in a storage room in the area of the north tree,” Downey explained, “and at least one of the contractors said that he could not bring the water service in with a tree there.” All of the contractors were horrified that the tree was so close to the foundation. Another call was made to the Parks Department. This time the Parks Department showed up with a cherry picker and a saw. Within two hours, the trees were cut down and the branches carted away, leaving two flat circles, 18 and 26 inches in diameter, along with a great deal of sawdust.

“I feel like I've lost two children,” said Jonas Mekas.  “I remember how we planted them with George, how we watered them, how we protected them from the police who wanted us to uproot them. I also feel it marks the end of an era. Until now, SoHo was still part of a living memory of a heroic period when artists, led by George Maciunas's unbending vision, embarked on the transformation of Manhattan's downtown. The death of the two trees marks a new era: a total integration of SoHo into the overall map of the City of New York. The project, which George considered his real work of art, has been finally completed.” Roslyn Bernstein is the co-author with Shael Shapiro of Illegal Living: 80 Wooster Street and the Evolution of SoHo.